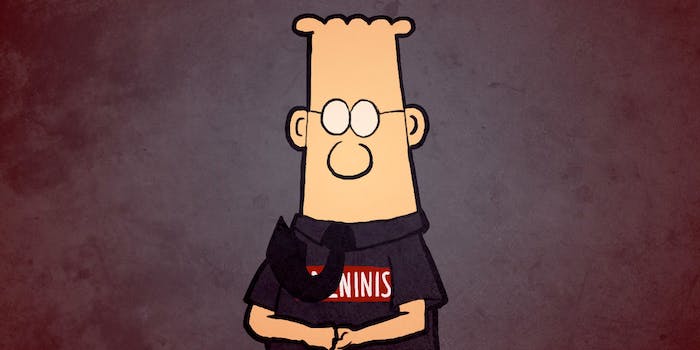 Scott Adams has made a second career criticizing feminists and theorizing on Trump's power.

You probably weren’t looking for fringe social commentary in the funny papers. But readers of Dilbert—the serialized comic that began skewering cubicle culture long before Office Space and The Office—noticed an odd theme running through the recent work of its creator, Scott Adams.

Adams’ derision of so-called “social justice warriors” is not a new development. As any reader of his blog knows, Adams has frequently and adamantly criticized feminism and feminists for what he recently dubbed in a post “The Humiliation of the American Male in 2016.”

Of particular interest in Adams’ latest blog entry is a harmless Cascade ad featuring a wife criticizing her husband’s dish soap purchase. Adams spins this commercial to mean a Trump victory in November is imminent because “Melania never asks Donald to go back to the store because he’s too dumb to buy the right kind of soap on the first try.”

The connection comes from Adams’ second act in American public life as an oracle of sorts to men’s rights activists, alt-rightists, and Trump supporters. (So much so, someone created a parody Tumblr called MRA Dilbert, which takes Adams’ musings and combines it with his art.) In his self-titled blog, Adams has personally developed the theory that Trump is “a master persuader”—or, more succinctly, a “clown genius.” Adams does not endorse Donald Trump for president—he publicly endorsed Hillary Clinton “for my personal safety, because I live in California”—but his theory of why Trump has developed such a following has earned Adams his own loyal horde.

Any visit to /r/The_Donald—the pro-Trump subreddit with over 168,000 subscribers that is slowly taking over Reddit at large—reveals the true power of Adams’ words. On the subreddit, where he is popularly known as “Based Scott Adams,” the comic strip artist is seen as a “prophet” and “savage,” opposing a perceived onslaught of limitations brought on by political correctness.

Part of the reason for Adams’ fame among Trump supporters is his theory that Trump, despite how things might appear, is actually a shrewd and hyper-intelligent manipulator of the media and large audiences. In what he calls the “Master Persuader Theory,” Adams posits Trump and other figures (like Bill Clinton and Steve Jobs) have influenced large crowds through mass hypnosis, allowing people to project onto him their own wishes for a candidate.

Trump’s vagueness on policy and detail is a conscious choice, according to Adams. “The empty spaces are provided for you to fill them in with whatever you think is a good idea,” he said. “For a skilled wizard, the less he says, the more you like it.”

Adams feels qualified to make these assumptions, because he says he too is a master persuader. “Have you ever wondered why Dilbert has an uncommon first name, no last name, a nameless boss, and he works for a nameless company, making nameless products, while living in a nameless city?” asked Adams. “That’s hypnosis. By omitting those details, I allow the reader to better feel some version of ‘That’s me!’”

In an AMA a few months ago, Adams said that many Trump supporters are aware the candidate is trying to persuade them and they don’t seem to mind. “If you don’t like the persuader or the message, you see it as manipulation, suckering, conning, lying, and general evil,” said Adams. “But if you think the only goal is to make America great (again), you see it as leadership.”

And the idea that Trump is disguising himself as a blowhard, red-meat conservative allows his voters to forgive themselves for simply liking him. And not just liking his personality—Trump often wins big points with /r/The_Donald for his supposed wit and alpha male demeanor—but liking him because he often speaks out against women and the marginalized.

Reddit has long overflowed with men who believe feminism and feminists are distinctly harmful forces in American life. /r/MensRights and /r/TheRedPill have both been cited by the Southern Poverty Law Center as “thick with misogynistic attacks that can be astounding for the guttural hatred they express.” Reddit has banned some its most vile content, including the inflammatory /r/beatingwomen, but the misguided and hateful ideas behind these communities still flourish on the site today.

So it’s not a surprise that Reddit, especially /r/The_Donald, became the breeding ground for Adams’ “Trump is a genius” philosophies, where Trump is hailed as an “alpha male” and non-Trump supporters are quickly labeled “cucks” (as in “cuckhold”). Where these men endlessly defend the notion women are just as—if not more—privileged than men. And where they find themselves to be the best guardian of women when they accuse Muslim refugees of mass rape.

Adams’ recent forays into men’s rights talking points are not a new development, however. Back in 2011, Adams wrote on his blog that rape was a natural instinct for men: “If a lion and a zebra show up at the same watering hole, and the lion kills the zebra, whose fault is that…in other words, men are born as round pegs in a society full of square holes.”

“Adams and his acolytes want to believe they couldn’t be attracted to simple, hate-filled ideologies, so they call Trump, the most vocal proponent of such ideas, a genius.”

Which are of-cited concepts of the men’s rights movement and, indirectly, the Trump campaign. When Trump slurs out, “The women have it better than we do, folks,” the crowd hoots. Supporters of Trump, of Adams, of men’s rights, see themselves as living above the common strata of the average person. This is the notion of the “red pill”—like Neo in The Matrix, they’ve ascended to “reality” while the rest of us fall for the “illusion.”

Because Trump himself refuses to intellectualize his disdain for women and minorities, his supporters do it for him. Like Adams’ posts, pro-Trump forums are filled with lengthy edicts by wannabe Warren Farrells and Herb Goldbergs looking to disprove the existence of male privilege. Confirmation bias becomes a way of life, as anecdotal evidence becomes concrete “evidence,” and dish soap commercials become hard proof that the world is out to strip men of their ability to be men.

Adams is a participant in the men’s rights movement, whether he admits it or not. He might call men’s right activists a “bunch of pussies” and claim to not support Donald Trump, but he also dismisses Trump’s strong talk on immigration and Muslims as “hyperbole”—yet another tool of master persuaders, among which Adams counts himself. Or he says Trump’s opponents are simply mistaken about the candidate’s misogyny and bigotry because “[Trump] has proposed no racist policies and he has no racist acts in his past”—except for this one and this one and this one and these 10.

Adams and his acolytes want to believe they couldn’t be attracted to simple, hate-filled ideologies, so they call the most vocal proponent of them a genius. Because otherwise, they’d have to admit that the only people they’re persuading are the people who already believe in such hate—themselves.