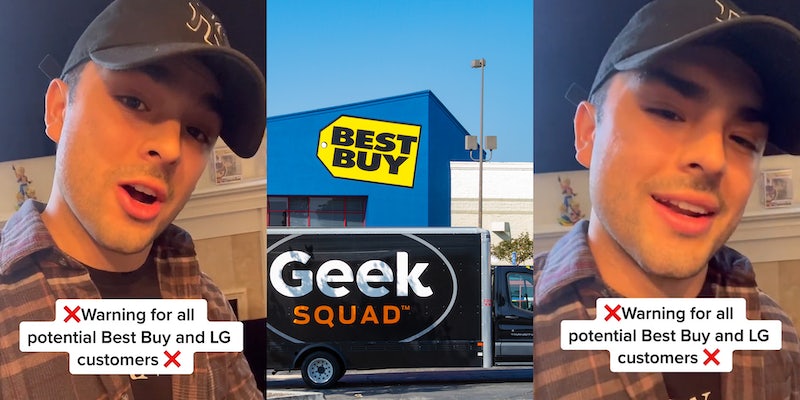 'They don't care about you at all, and when you need them most they will not be there.'

Diego Tinoco, an actor who played Cesar Diaz in On My Block and Mateo in the MTV series Teen Wolf posted a now-viral TikTok calling out Best Buy, its tech assistance service Geek Squad, and LG Electronics for a poor experience he had with the installation of a set that he says cost him $3,000 total.

In the clip, he urges folks to never purchase products or services from the retailer and that even though he can afford to buy a new set, the way he was treated left a bad taste in his mouth. In a caption for the video, Tinoco writes, “3G’s down the drain. Never buying from Best Buy, LG, or Geek Squad again.”

The actor has 4.7 million followers on TikTok and as of Saturday, the post has garnered over 2.2 million views and over 11,000 comments.

3G’s down the drain. Never buying from Best Buy, LG, or Geek Squad again. 🤦🏽‍♂️ Comment what kind of TV to get next! 😂😅

“Do not ever in your life buy anything from LG, Best Buy, and more than anything don’t ever buy that stupid little Geek Squad warranty that they offer you,” Tinoco starts the video. “Not only do they have absolute terrible customer service but their agents are literal trash at their jobs.”

Tinoco then further details the experience that left him so dissatisfied. After his TV was installed the first time, he claims it was damaged and “glitching out.” He alleges the Geek Squad agent told him it was fixable, but argued that Tinoco caused the damage, which would not fall under their policy.

“I tried to explain to the guy I haven’t done any damage,” Tinoco says. “I didn’t touch my TV. man. I was in Kentucky shooting a film. I just got back. I’m just trying to watch some TV with my nieces. And then he continues to accuse me of punching and mishandling my television.”

Tinoco went on to describe that as “Strike one,” but goes on to call it “water under the bridge.” Best Buy’s Geek Squad then sent another agent over, who Tinoco said was very friendly and likeable. However, he still had a poor experience.

“The man literally grabs my television on the bottom left corner of the screen squeezes it as hard as he possibly can and my TV blacks out, completely,” he says. “Glitches, broken, done. Don’t believe me? OK, I’ll try to turn it on.”

At this point in the video, Tinoco, who is holding a TV remote in the hand he’s not recording the video with, points it to a set mounted on the wall and attempts to turn the set on. The video shows a black screen with a white horizontal line scrolling through it. He sighs and goes on with his story.

“The guy leaves my house and says ‘oh don’t worry, dude, it’ll turn on in like ten minutes.’ It has been over five hours,” the actor claims. “So I call LG, I call Best Buy, I call Geek Squad, I call everyone and they all tell me the same damn thing: there’s nothing we can do for you.”

Tinoco explains that though he can afford a new television set, he is adamant about purchasing it elsewhere.

“Don’t buy an LG TV, don’t buy anything from Best Buy, but more than anything, don’t buy that stupid little warranty. Because they do not care about you,” he concludes. “They don’t care about you at all, and when you need them most they will not be there. I’ve been doing business with Best Buy for like ten years. I always buy the Geek Squad warranty. I’ve never needed them. Not once. And this one time, this one time, that I actually have an issue—that I didn’t even do—the guy fucking came over here and broke my television.”

He then adds that he plans to buy a Sony TV from Costco or Sam’s Club and urges viewers to avoid Best Buy.

In the comments, many viewers commended Tinoco for using his platform to air out a negative experience with a company.

“This is exactly how I need celebrities to use their platform,” another added.

Additionally, several TikTokers claimed they had similar experiences to Tinoco.

“I’m glad he did this review. It sucks being a regular customer and not being heard so hopefully now that a celeb is reviewing we get heard!” one viewer wrote.

“Geek squad played me like that too,” a second claimed.

“@bestbuy ima need y’all to give him a refund and while you’re at it refund me too , cause I payed for the geek squad warranty, that didn’t even work,” a third argued.

Other folks couldn’t believe that the business didn’t try to make things right, given Diego’s profession and celebrity.

“Best Buy finna mail you the biggest tv they got bruh,” one viewer joked.

“Just imagine the Ceo’s faces when they find out their employees didn’t know who they messed with,” a second considered.

The Daily Dot has reached out to Best Buy and LG Electronics via email, and Diego Tinoco via Instagram DM for further comment.