It's about "noticing what is really important, the people around you,” Nigro, a recent high-school graduate, told the Daily Dot.

In fall 2010, Jonah Nigro sat in a hospital room watching his grandfather die.

When he wasn’t holding his grandfather’s hand, the high-school student  held a sketch pad and channeled his sorrow into the following apocalyptic sketch. 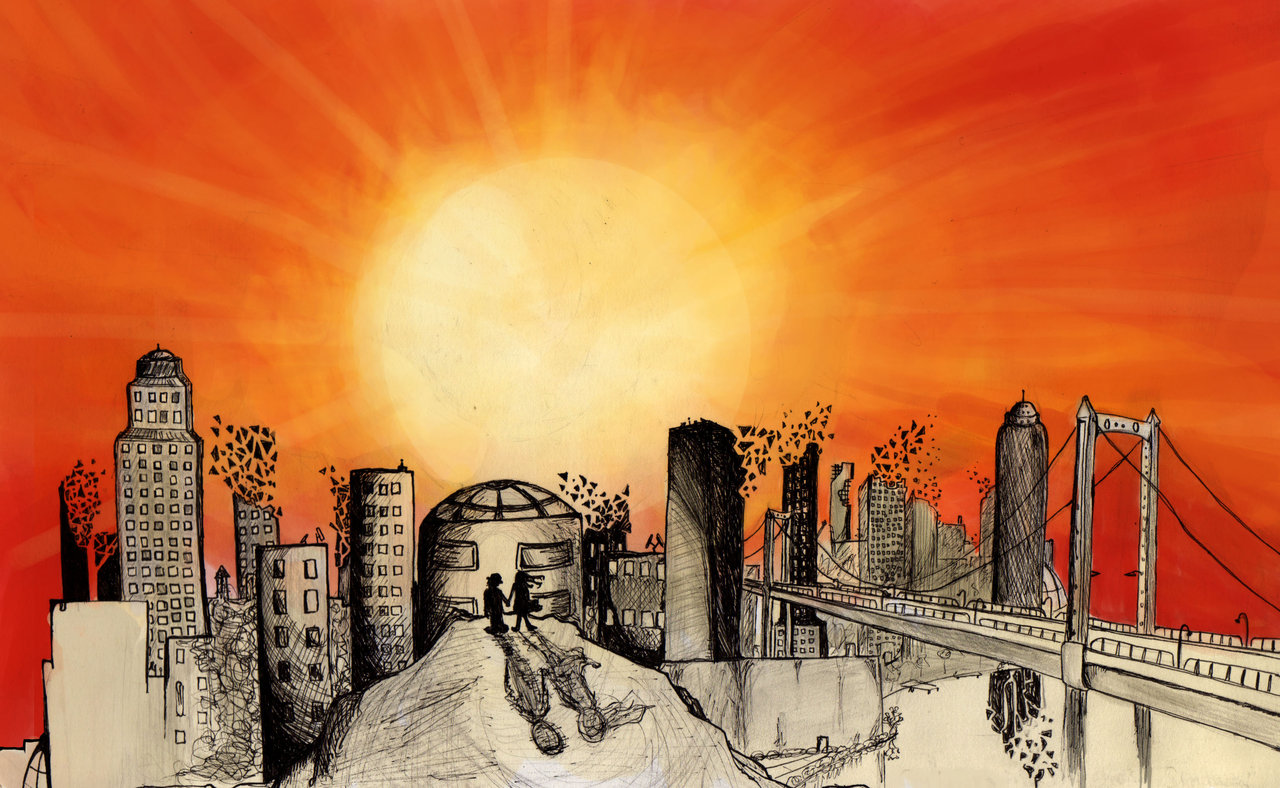 ”I was in a very calm, accepting place,” Nigro wrote on DeviantArt.

“And I tried to portray that in the picture, shying away from harsh smoke or little fires, I tried to make it flow. So although the world is over, the two in the picture are accepting their fate and enjoying the beauty of the last sunrise.”

Shortly after his grandfather died, Nigro enrolled in an art program at the Oxbow School in Napa, Calif. It is there where he transformed his sketch into a stunning work of art. But first he had to get his mind in the right place.

Nigro read The Tibetan Book of the Dead, the Old Testament, and books about serial killers. He also watched Wristcutters: A Love Story, and when he wasn’t writing tirelessly in his journal about his grandfather’s passing, Nigro hunched over a large piece of paper where he spent 144 hours refining his sketch (all while listening to Harry Potter on tape).

The finished artwork still features a couple staring at each other. Only this time, the end of the world is far more devastating. While other people disintegrate around them and the buildings crumble under a large yellow explosion, the only thing sparing the couple from immediate death is the fading shadow of the Empire State Building.

“It’s not about romantic love being the answer as it is about noticing what is really important, the people around you,” Nigro told the Daily Dot. “I made it a man and a woman with little detail, hoping that people could see themselves in the image and relate to a parent, or child, or friend, or significant other.” 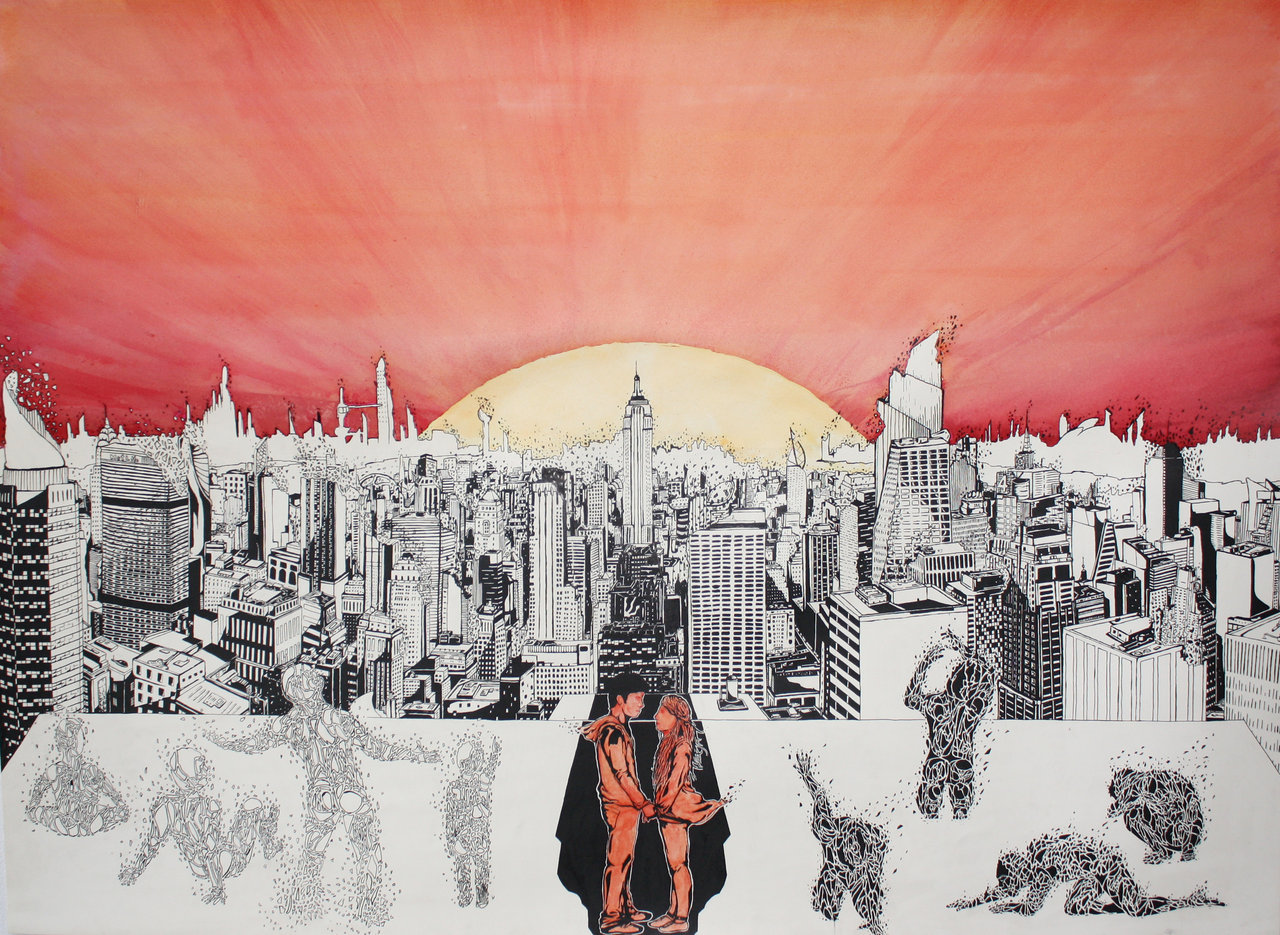 One person who related to the artwork was Reddit novelty account shitty_watercolour. On the eve of his high-school graduation, Nigro posted his illustration on the social news site asking the popular novelty account to reinterpret his proudest art creation.

Nigro is no stranger to Reddit. He conducted a popular Reddit AMA (“ask me anything”) session where he described his childhood life backpacking around the world with his mother, with hardly any money between them.

Shitty_watercolour did not disappoint in return, but he had to resort to using charcoal since he was away from his paints Sunday. 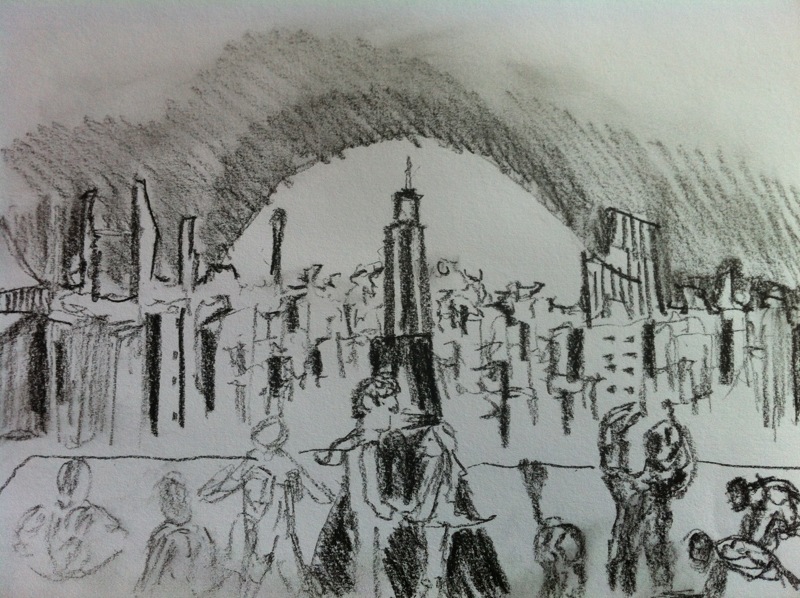 “This is the only thing I have created that I am truly proud of, and even this I think could be greatly improved,” Nigro said. “I only made around $200 from around 20 people who bought a print, but I didn’t get any money for graduation so that will probably end up funding my summer.”

This fall Nigro will enroll at Bennington College where he plans on studying animation. In the meantime, he hopes people continue to interact with his artwork.

“I personally prefer when people look at this image and take away their own meanings or feelings. I have gotten many responses from people who were moved and took away various messages that they could relate to personally.”