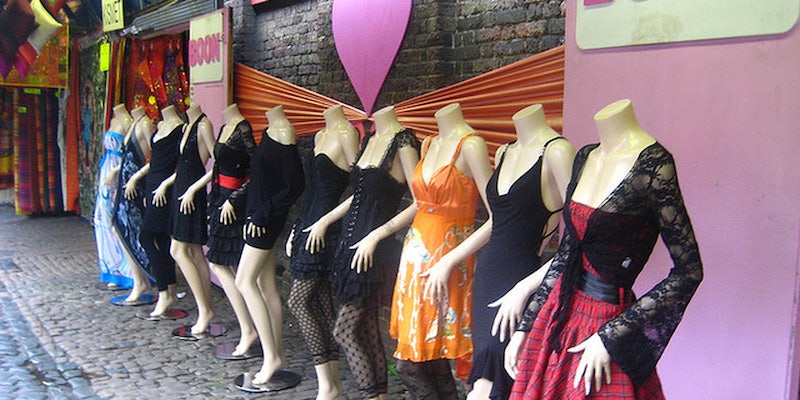 Here’s a fun new fetish: Photoshopping the heads off women

Off with her head, says deviantART.

These are just a couple of the comments left on one particular deviantART photo of a model with her head Photoshopped off. The title is “Headless Tease 32,” and she’s just one of many models on the site who have lost their heads.

Headless Tease 32 by rgt on deviantART

There are several galleries devoted to “photomanipulation” of women’s bodies on deviantART, to which the tag “surreal” is often applied. The photo “Beach II” features a busty model lying on the beach, covered in sand and little else. This comment exchange follows:

“awesome headless milani pic! she still looks hot, even more so without a head”

There are quite a few other headless women “enjoying” beach vacations as well:

just layin here being headless 4 by rgt on deviantART

Headless Vacation by rgt on deviantART

Yes, this fascination with headless women “enjoying” activities is unsettling. There are deviations on theme: Women holding their own smiling heads, or assembling a “doll” version of themselves, or existing with a television or animal head. These depictions contain a little more context than the headless models in lingerie and bikinis, but in each there’s an element of objectification. The woman is free of a face; she is strictly a body to view and comment on. There’s also a gallery of women without arms, eyes, or mouths.

These off-with-her-head manipulations seem to have found a small community of admirers and fetishists. Part of the popularity of the images come from a critique of the artists’ Photoshopping technique. Then there’s an appreciation of the headless woman’s body, often in a sexualized position. (Emails to a couple popular headless artists went unanswered.)

There are even updates on the headless model, like this one in which her head has been replaced by an iPad. She is known only as “New iBabe Air.”

The New IBabe Air by rgt on deviantART

There are imagined situations for these headless women. This photo of two women who might have been conversing, if they had heads, is given this caption:

“Doing some adjustment before the meeting. The big boss that invented the ability for women to become headless is coming to the service office and they are trying to look good for a first impression.”

There are also collections of headless celebrities, like Mandy Moore and Megan Fox. Alternately, there are galleries devoted to just the disembodied heads of female celebrities.

Sure, there could be a surrealist neo-technology movement afoot here. DeviantART is certainly a place for up-and-coming artists to flourish. But there’s a troubling narrative thread running through many of these images, too. Beneath a photo captioned “hot body headless girl in the kitchen,” the nameless hot body is further described as the “perfect woman.” Elsewhere, a photo titled “Headless Bikini 16” is given this suggestion:

“Would have liked to see her cut in half at her waist, too.”