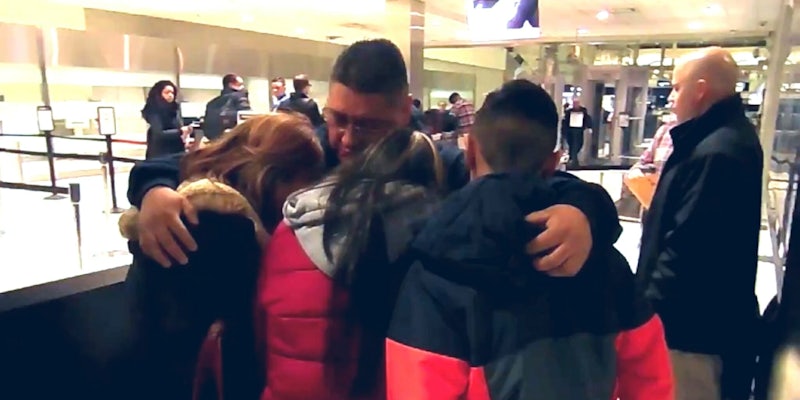 Detroit father deported after living in the U.S. for 30 years

The U.S. is the only home he's known.

His parents brought him to the United States when he was 10, where he’s lived for three decades. His wife and his two children, 12 and 14, are citizens; his supporters say has no criminal record; and he pays taxes. But on Monday morning, he gave his family one last hug at the Detroit Metro Airport before being deported to Mexico, as two immigration agents kept watch.

According to the Detroit Free Press, U.S. Immigration and Customs Enforcement  (ICE) deported 39-year-old Jorge Garcia on Monday. His wife, Cindy, told the publication that the family has spent $125,000 in legal fees since 2005 in an attempt to get Garcia, who is undocumented, legal status.

After years living in the U.S. for 30 years, a 39-year-old immigrant in metro Detroit was deported this morning to Mexico. Escorted by ICE agents, he said bye to wife and 2 kids before boarding. He was brought to US from Mexico when he was 10-yrs-old, too old to qualify for DACA: pic.twitter.com/KFPeweaMbG

"Stop Separating Families," read signs from supporters of Jorge as he prepares to board flight for Mexico in a deportation by ICE, part of crackdown by Trump administration: pic.twitter.com/Vl47minwpd

While he’s faced an order of removal since 2009, Garcia was given stays of removal under the Obama administration, but was ordered to leave in November. Cindy said he may be barred from reentering the U.S. for at least 10 years.

Garcia, whose story echoes the thousands of undocumented immigrants facing deportation under the Trump administration, is too old for the DACA program that allows childhood arrivals to work legally in the U.S. He was able to extend his stay for one more Christmas, during which his family asked ICE if he could stay until new undocumented immigration reform was passed, but they were denied.

The Garcias have also started a GoFundMe to support their family.