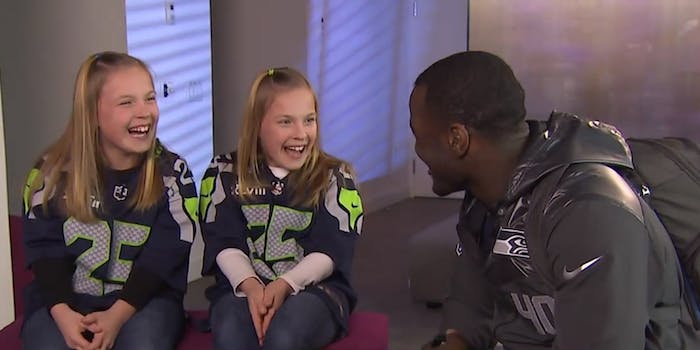 Two of Derrick Coleman's biggest fans will now be able to watch their hero play on Super Bowl Sunday.

Thanks to Seattle Seahawks fullback Derrick Coleman, two of his biggest fans will now be able to watch their hero play on Super Bowl Sunday.

Coleman is the only deaf player in the NFL, and his actions on and off the field have inspired a new generation of fans and many in the hearing impaired community. Two of those fans, 9-year-old twins Riley and Erin Kovalcik, were inspired by his recent Duracell commercial and wrote him a letter after his team made it to the Super Bowl.

@Seahawks @DC2forlife you’ve inspired my little girls in a way I never could. THANK YOU! #Seahawks #SuperBowlXLVIII pic.twitter.com/lhpJfCPOSD

Coleman, upon seeing the letter, wrote back and promised to hang out with the girls, who are both hearing impaired, if they were ever in Seattle.

@JakeIsMobile Your girls are awesome! Read them my letter back when you can! Thank you for the support! Means a lot! pic.twitter.com/9x5tQQwNbk

However, he fulfilled his promise a lot sooner than either Riley or Erin expected when he dropped in on them in the middle of an interview with ABC News. The girls were in shock as he talked with them and he gave them an even bigger surprise.

Their faces say it all.