The FBI is now investigating the allegations

The Denver Police Department is facing allegations of excessive force after a video emerged depicting a veteran patrolman striking an unarmed and restrained man multiple times in the face.

According to police reports, the suspect refused to cooperate during his arrest and shoved a white sweat sock into his mouth which the officers had reason to believe contained heroin. After the suspect was on the ground, the video clearly shows Officer Jones punching him six times in the face causing his head to repeatedly and forcefully strike the pavement.

The suspect, a Honduran immigrant identified by police as David Nelson Flores, was stopped by the narcotics officers after they witnessed him buying what they believed to be heroin. After “assisting” Flores from his vehicle, police said, they “fell to the ground.” Officers Jones and Evans then arrived as backup to assist in the arrest. Evans is seen in the video holding down Flores’ legs while Jones repeatedly punches him, screaming: “Spit the drugs out! Spit the drugs out!”

Due to the risks faced by the undercover officers, the names of the two narcotics detectives involved in the arrest are being withheld.

Flores’ girlfriend, identified as Mayra Lazos-Guerrero, was seven-and-a-half months pregnant at the time of the incident. She can be heard screaming in the background of the video, begging Jones to stop his attack on Flores. When she tries to intervene, Jones responds with a “leg sweep,” causing her to fall forward onto her stomach and face.

Called upon to analyze the footage, Former Brighton Police Officer Mark Carlson told reporters that he would have reacted similarly. “Whether it’s pushing her, jumping up to confront her, grabbing her, whatever it is, because you’re not sure what the threat is.”

Carlson was far more critical, however, of the punches being thrown by Jones that day. “I just don’t see how either swallowing evidence, or they’re worried about him joking, is justifying that degree of force.” he said. “We don’t want you to choke so we’re going to fracture your face instead.” 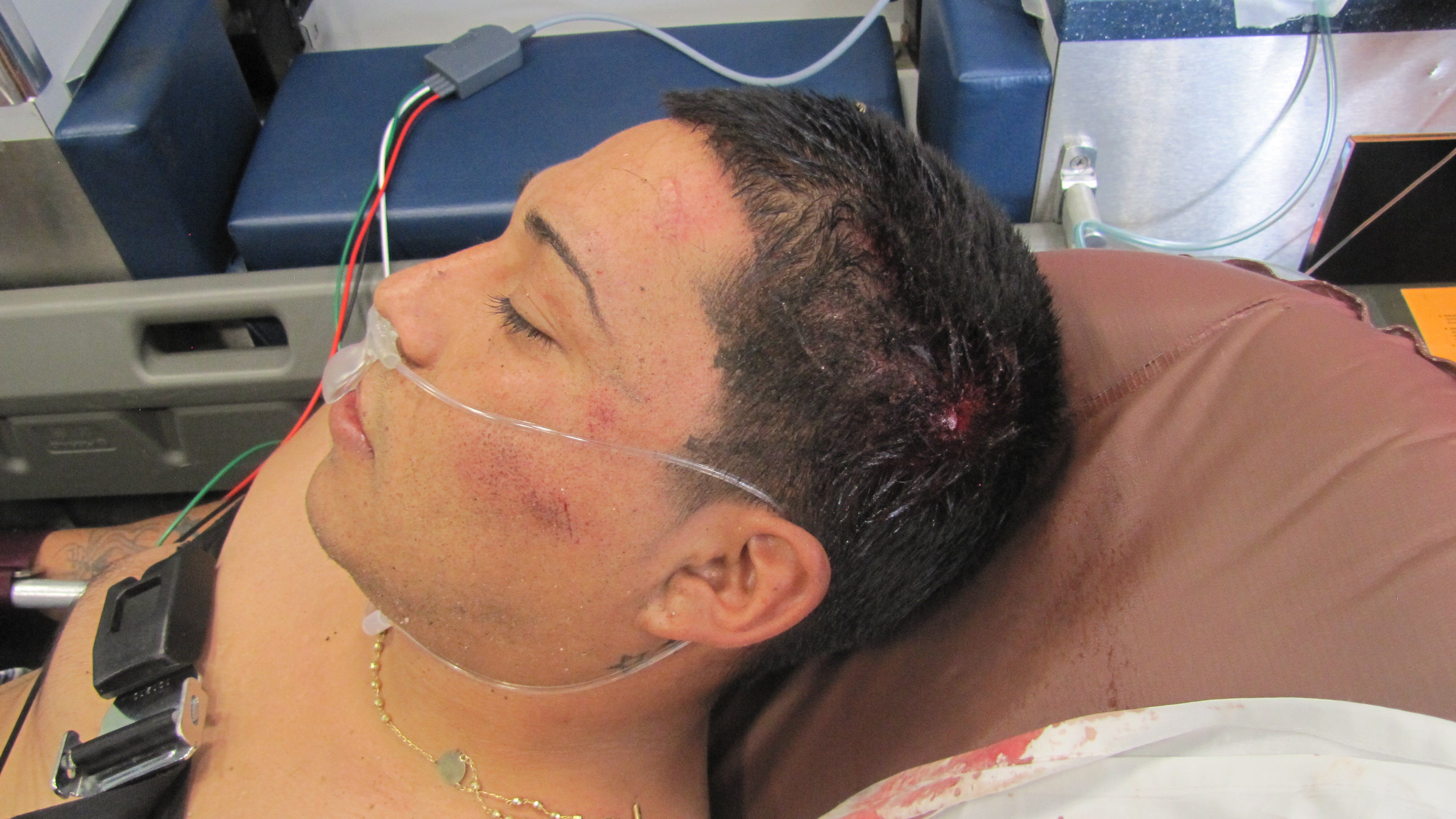 Cuts and bruises shown on David Flores’ head after his Aug 14. arrest

Officer Jones stated in his police report two reasons for his use of force: He was trying to prevent Flores from choking on what he believed was a bag of heroin, and he feared that one of the other officer’s arms was injured and trapped beneath the suspect.

The internal affairs division of the Denver Police Department reopened the case this week following the release of the footage, captured by Levi Fraiser, a bystander (it was a previously closed investigation). However, questions are now being raised over whether police may have violated Fraiser’s civil rights and federal law following his accusations that police seized the Samsung tablet he used to take the video.

“When he took it, I said, ‘Hey! You can’t do that. You need a warrant for that,” Fraiser told reporters. The officers reportedly asked what program he used to take the video and without his permission or obtaining a court order proceeded to search the device.

When the tablet was returned, according to Fraiser, the footage of the incident had been deleted. He later recovered the 55-second video from his cloud media storage.

“I’ve seen some people get punched in the ring and on TV and what-not, but the sound of those resonating, I mean, it was scary,” Fraiser said during an exclusive interview with FOX31. “I’ve never heard anything louder than that and I used to cage fight for quite a while and I’ve never seen punches harder than that.”

“When I looked at this case, this was a situation that didn’t present itself as a one-time thing, or didn’t present itself as a one-off,” Flores’ attorney Benjamin Hartford told reporters in an interview aired by FOX31 on Wednesday. “The way the officers responded and what they did and what they said, it didn’t look like their first rodeo, as they say.”

The allegations of excessive force, as well as the potential illegal search of a witness’s electronic device, are currently being reviewed by the Federal Bureau of Investigation’s public corruption unit.

Flores faces a charge of resisting arrest and two felony drug charges in connection with the incident. Guerrero allegedly had drug paraphernalia in her purse at the time of her arrest for obstruction. She also faces charges of child abuse because there was a minor in the car when the arrests took place.

Neither Flores nor Guerrero showed up for their last court appearance. Their respective attorneys have asked that they turn themselves in.

The Denver Police Department did not immediately respond to a request for comment.