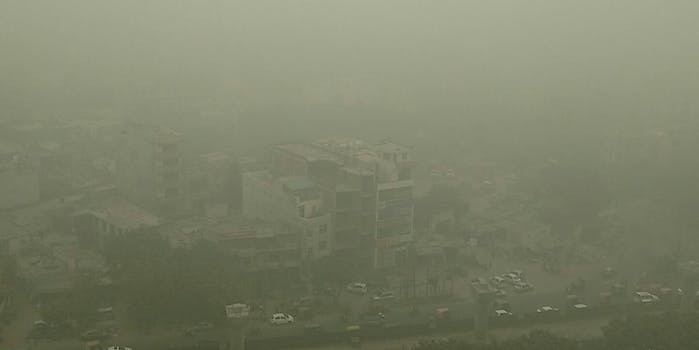 India's Supreme Court is calling the air quality a 'disaster.'

India has long suffered from pollution and bad air quality, but over the past few days, the smog in Delhi has been unbearable. Some parts of the city are reporting smog levels 16 times the government’s safe limit, with the Air Quality Index literally off the charts. Residents have been fleeing the city, and other large cities like Lucknow are starting to feel its effects.

#DelhiSmog pics before and after Diwali. Time for hard thinking on pollution of air and water in major cities. #DelhiChokes pic.twitter.com/i17gqoZr3F

The smog has also made its way to Agra, known for being the site of the Taj Mahal. Tourists are now being deprived of the iconic view of the mausoleum from its surrounding gardens.

After the longest travel day I've ever had, it was such an amazing experience to see this spectacular monument in the flesh. Unfortunately these photos don't quite do it justice but I promise it's somewhere in there behind all that fog! #tajmahal #getitindia #guessiforgottoputthefoglightson

The Supreme Court is calling the pollution situation a “disaster” and the Indian Green Tribunal has banned any construction in the region for the next seven days. New Delhi also ordered the closure of a nearby coal-burning plant and has banned diesel-powered generators for 10 days. Experts point to a rapid increase in vehicles and low emissions standards as culprits for the pollution, as well as firecracker smoke from Diwali celebrations. All of this combined with winter wind patterns has left the air stagnant.