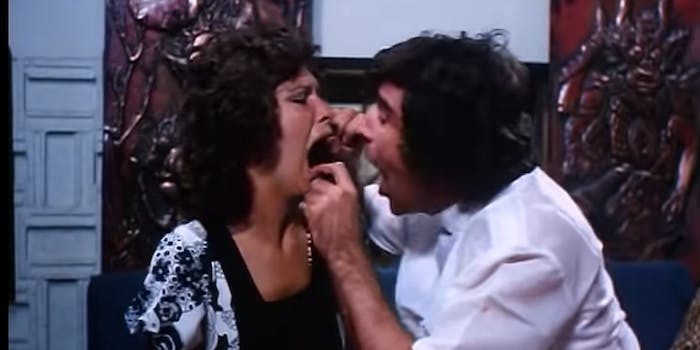 A U.K. feminist organization is petitioning Amazon to ban Deep Throat, on the grounds that star Linda Lovelace claims she was raped in the film.

The late LInda Susan Boreman testified and wrote how she was coerced into adopting the role of ‘Linda Lovelace’ by a violent and  controlling man called Chuck Traynor.

According to her sworn testimony, he was her ‘manager’, pimp and husband who forced her into making many pornographic movies including some involving bestiality.  ‘Deep Throat’ was one of the films which she alleged was made under duress, and consequently an actual record of rape. It is still being sold via Amazon UK.  Similarly a wide range of other ‘Linda Lovelace’ DVDs, T-shirts and fridge magnets are currently for sale via Amazon.  The fridge magnet has the slogan ‘I choked LInda Lovelace’, trivialising the high prevalence of strangulation in domestic violence, coercive pornography and prostitution.

In the context of the proposed legislation, and respecting a dead woman’s testimony, human rights and personal dignity, we call on Amazon to withdraw from sale all movies and ‘Linda Lovelace’ related memorabila [sic[ which she testified include the actual records of abuse and/or trivialise her ordeal.

Although Lovelace claimed later in life that her performance in Deep Throat and its sequels were coerced, it’s unclear whether her adult work falls under that category. After divorcing her husband and manager Chuck Traynor and becoming a born-again Christian, Lovelace claimed in her autobiography Ordeal that Traynor beat her, raped her, and forced her to engage in sex acts with other men by holding a gun to her head off camera. “I felt like garbage,” she wrote. “I engaged in sex acts for pornography against my will to avoid being killed.”

We’ll never know for sure whether Lovelace’s allegations of rape and abuse off-camera were true, and she’s far from the only former adult performer to make similar claims about the adult industry. But sadly, the fact that their performances at least appear consensual on camera means most of these women can do little to prevent anyone with a wireless connection from accessing them.