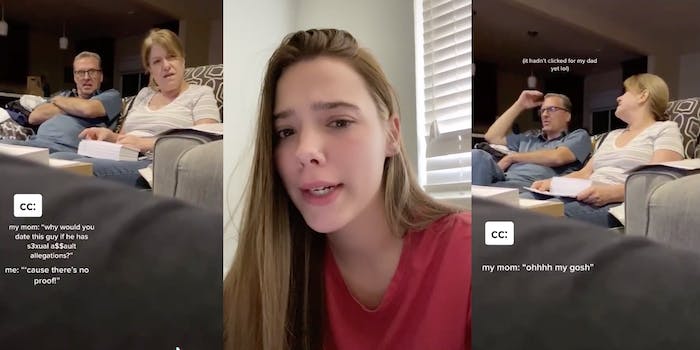 She claimed to be dating a guy with sexual assault allegations.

A conversation a daughter had with her conservative parents has gone viral after it highlighted the hypocrisy of so many people who voted for President Donald Trump in 2016 and plan to do so again in the current election.

Faith (@faithashjuran) started off by telling her parents that she’s going on a date the following weekend. The two are multitasking and don’t seem to realize they’re being recorded as their daughter continues to lay the groundwork for what’s to come.

“Seems like he has a really good relationship with the Lord,” she says. “He does have a few sex assault allegations though.”

This gets the attention of both mom and dad, and mom asks Faith to repeat herself before accusing her of lying.

“Why would you date this guy if he has sexual assault allegations?” her mom asks.

“‘Cause there’s no proof!” Faith insists.

Her parents are clearly taken aback by how casually she’s taking something like this, but still, Faith decides to keep pushing.

“Also did a deep dive on his Twitter and he’s said some kinda racist stuff,” she continues.

Her dad is shocked that she would “even consider this,” and her mom is still stuck on the sexual assault allegations, which she says is “never good.”

“But you’d let a man like this run the country?” Faith finally asks.

It takes a minute for it to click with dad and mom has to explain that their daughter is “pulling a Trump card.”

“Seriously, Faith?” she asks, clearly annoyed with her daughter rather than enlightened by the proof of her own hypocrisy.

Faith’s video evoked visceral responses from a number of viewers, who expressed frustration with the obvious double standard.

“Lol they were like ‘that’s never ever okay’ and then when you brought up Trump here came the excuses,” @sierraleandel commented on TikTok.

Another user on Twitter pointed out that you “can see the critical thinking stop as soon as they realize it’s political.”

Unfortunately, there’s no follow-up at the moment to see if Faith and her parents ever got any further with this conversation or if it was merely dismissed as a prank.