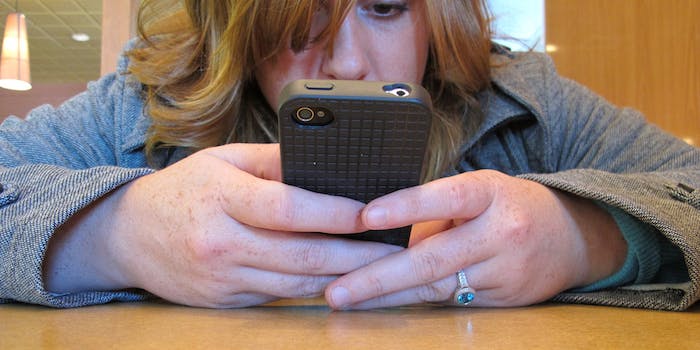 Does using Tinder count as infidelity? This French judge seems to think so

This is why married ladies shouldn't swipe right on that dude riding an elephant in his Tinder pic.

Even if you’ve been in a relationship for a gazillion years, you’ve probably been bored and furtively downloaded Tinder or OkCupid on your phone, flipping through profiles and maybe trolling a lewd suitor or two by pretending you’re a neo-Nazi/convicted murderer/hospital patient in dire need of a kidney.

If you ever end up in divorce court, however, your Tinder trolling might be less harmless than you think. A judge in Aix-en-Provence, France, recently ruled that flirting on online dating sites is grounds for divorce, regardless of whether or not you’ve had any “physical contact” with your online suitors IRL.

The Daily Mail reports that the couple in the divorce case, identified only as Nathalie and Bruno, separated this year after three kids and 18 years of marriage. In court, the husband alleged that the breakup was prompted by his discovery of Nathalie’s profile on the Belgian social network Netlog, where she was chatting with and sending sexy photos to other men. (For her part, Nathalie said her online infidelity was prompted by “depression,” which in my book is basically synonymous with “being married for 18 years,” but no matter.)

Nathalie swears her online flirtation with other men was just that, and she did not have any contact with her suitors offline. Yet a judge ruled in favor of the husband and granted him a divorce, with the husband’s lawyer Helene Poivey-Leclerq arguing that his wife’s online activity constituted a breach of marital vows.

“French law states that spouses owe each other mutual respect, fidelity, and help,” she told the Daily Mail. “It was in this notion of respect that the wife had failed.”

Did she really, though? While no one is arguing that a spouse seeking an extramarital relationship online can necessarily be good for a relationship, as social networking and online dating sites become more prevalent it seems almost inevitable that a spouse would log on every once in a while to exchange a flirtatious message or two, because your friends are all using the sites and you’re curious to see who’s on them and you’re allowed to peruse the buffet even if you’ve already ordered the salmon.

Of course, in this case it doesn’t sound like Nathalie was merely taking a curious glimpse or two at the buffet; it sounds like she was grabbing as many jumbo shrimp as she could and shoving them in her pocket to take home with her. But either way, the judge’s ruling that screwing around on Tinder is tantamount to screwing around in real life shows how rapidly technology is transforming the definition of fidelity—and at the very least, it means people in relationships who have OKCupid profiles should probably clear their browser history more often.