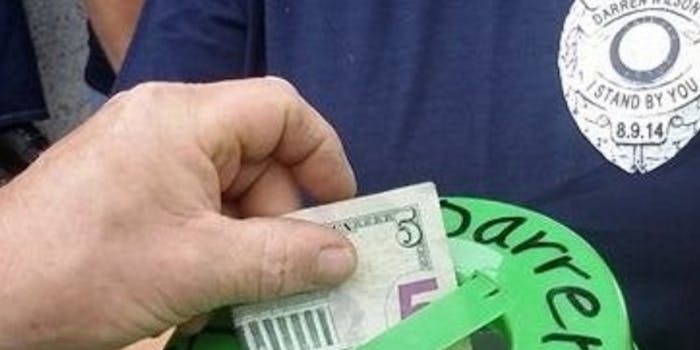 The recent events in Ferguson, Mo. have inspired several crowdfunding campaigns, but the most controversial is surely the GoFundMe page for Darren Wilson, the police officer who shot unarmed teenager Michael Brown on Aug. 9.

Four days after it was first posted to GoFundMe, “Support Officer Darren Wilson” has raised over $129,000, all of which will go directly to Wilson and his family. Wilson is on paid administrative leave from his job, and has not been arrested or charged with any crime. The KKK has a separate fundraiser running for the officer.

The other two main fundraising pages coming out of Ferguson are the Michael Brown Memorial Fund and #FeedFerguson, whose proceeds go to local food banks. #FeedFerguson has now raised $144,000, and the memorial fund is up to $114,000 after seven days online.

The comments on Darren Wilson’s GoFundMe page have been shut down, but the messages posted alongside donations indicate that a lot of the funds are coming from other police officers across the U.S. One message on a $500 donation reads, “As a retired, career police officer, I donate this from my pension; hope this helps. We support & believe in you! God bless, my brother! It could have been any of us!” while a $200 signed “Former Cop,” reads, “Remember…you fought what others fear.” Many other donation messages include quotes from the Bible.

After a week and a half of heavily armed police officers using tear gas and other dangerous crowd-control techniques on protesters, this level of outside support for Wilson can only add to the tensions in Ferguson.