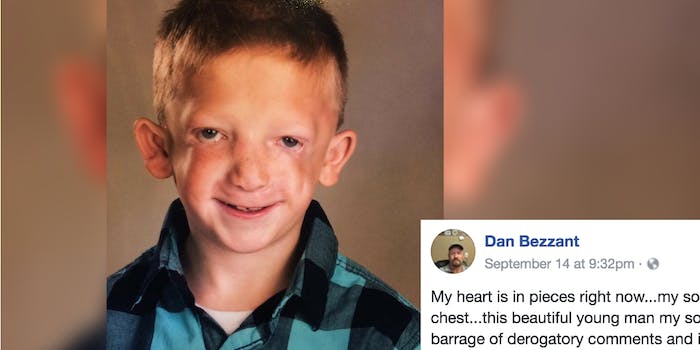 His son was called a monster and has mentioned suicide.

An Idaho father has gone viral after sharing a devastating story on Facebook about the cruel bullying his son faces as a result of a rare condition he’s had since birth.

On Thursday, Sept. 14, Dan Bezzant received a call from his ex-wife that his 7-year-old son Jackson had gotten picked on during the school’s breakfast time. Three older boys called him names and told him he looked like a monster, Bezzant told East Idaho News.

An aide stopped the bullying, but the news shook Bezzant, who broke down crying. Jackson was born with Treachers Collins, a facial bone and tissue development disorder that affects 1 in 50,000 people. As a result, Jackson wears hearing aids and has needed surgery to rebuild his left eye socket—the first of other procedures he may need in the future. He’s also senselessly teased because of how he looks, with strangers staring or making thoughtless comments.

“The adults are worse than the children,” Bezzant says. “One time a woman walked past us and we could hear her say, ‘Did you see that little boy’s face?’ If she’s saying things like that, what are her children saying? How are they acting?”

That night, Bezzant penned his plea to other parents asking them to put themselves in his shoes, and take a moment to educate their children about people with disabilities and special needs.

“He talks about suicide…he’s not quite 8! He says he has no friends and everyone hates him. Kids throw rocks at him and push him shouting these horrific words,” Bezzant wrote. “Take a minute to educate your children about special needs. Talk to them about compassion and love for our fellow man.”

Bezzant told People that Jackson had expressed feelings of suicide before, and had mentioned it a few times in the last few months.

The next day, Bezzant’s post had been shared more than 2,500 times, and as of Tuesday, it’s been shared more than 61,700 times, with 63,000 reactions. Some parents have shared that their children want to be friends with Jackson and protect him, while others have offered to send money and gifts, which Bezzant has declined.

To be sure, Bezzant has made it clear that Jackson’s school has done a positive job to prevent the bullying, and feels it’s on the parents to teach their children to be kind and accepting. While he doesn’t plan to tell his son about the post, he has set up a P.O. Box for families to send Jackson cards: P.O. Box 1563 Idaho Falls, ID 83403.

“I want parents to see my post and feel my heartbreak. This could be any kid anywhere,” Bezzant told East Idaho News. “Please educate your children and let them know that bullying is not OK…I didn’t think a simple Facebook post would get this big. I just hope this helps.”