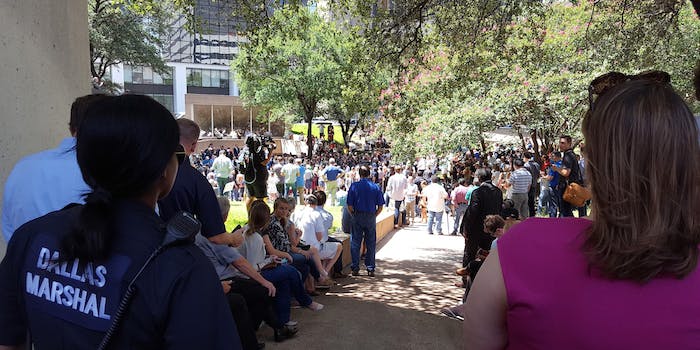 'We will not shy away from the very real fact that we are struggling with racial issues.'

Standing downtown at noon under the blistering Texas sun, a thousand or more Dallas residents joined hands on Friday and prayed for deliverance and peace.

Catholics and Protestants, Muslims and Jews—no doubt many Atheists—bowed their heads in prayer as one after the other, city officials and spiritual leaders beseeched the congregation, and indeed the entire country, to follow a path of unity.

The multi-faith group’s message of togetherness and support came roughly 18 hours after five Dallas police officers were assassinated in a heartless act of terrorism. Two civilians and seven officers were wounded in the attack, while many others—particularly, the Dallas cops who saw their comrades gunned down Thursday night—will carry unseen emotional scars, perhaps for the remainder of their lives. 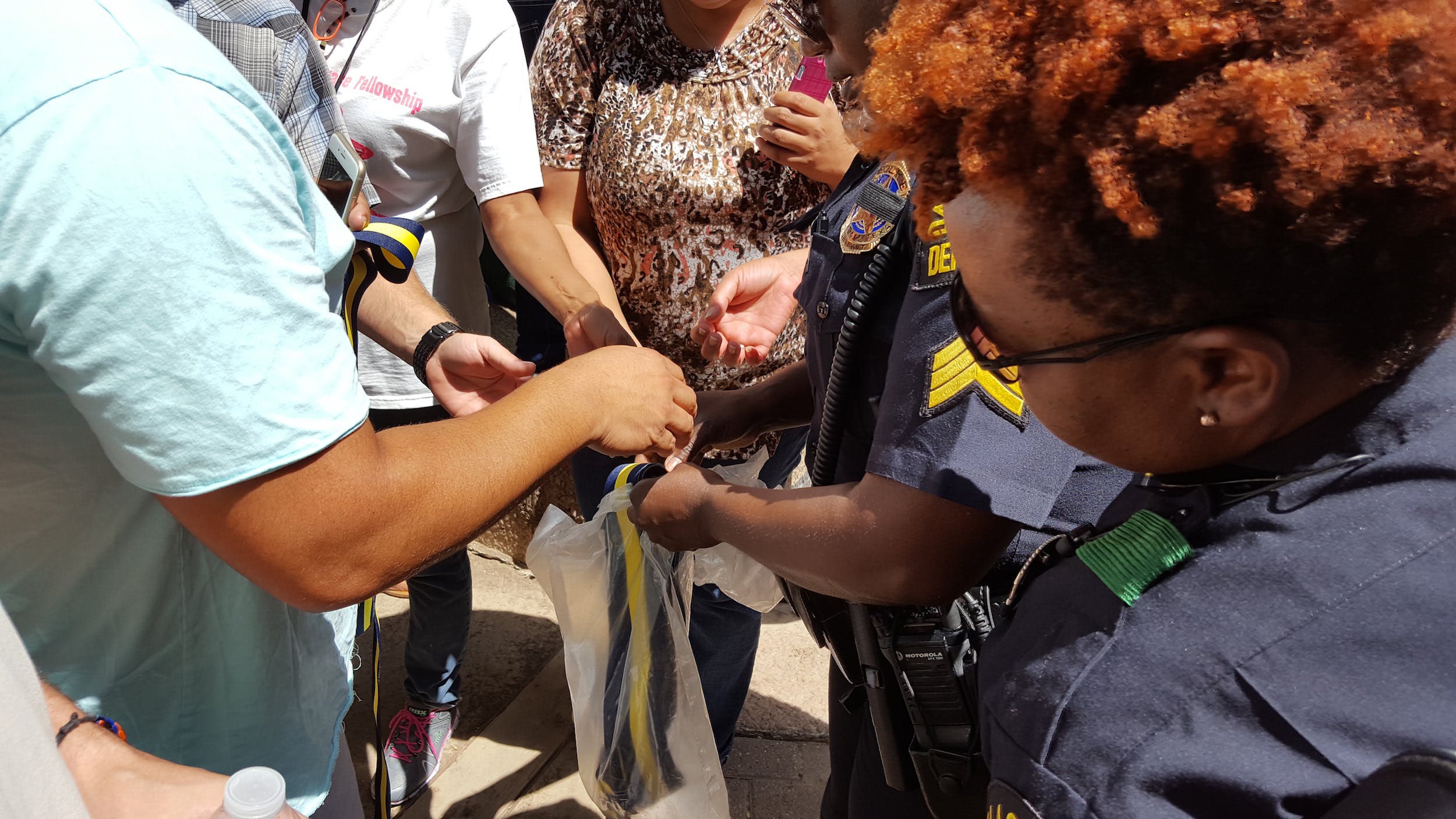 “It’s a dark night in America,” Bishop T.D. Jakes, whose sermon headlined the ceremony, told a crowd spread out across the landscaped garden of Thanks-Giving Square, mere blocks from where police have now concluded a sole gunman opened fire Thursday night, at the end of a Black Lives Matter protest against recent police shootings.

“Weeping may endure for a night … but joy cometh in the morning.”

Police have identified the shooting suspect as Micah Xavier Johnson, a 25-year-old Army Reserve veteran whom they say had no apparent connection to the protest he attacked. “He said he was upset about the recent police shootings,” the Dallas police chief, David Brown, told reporters on Friday. “The suspect stated he wanted to kill white people, especially white officers.”

Spurred by the recent and seemingly unnecessary deaths of black men at the hands of police, Dallas activists gathered under the banner of the Black Lives Matter movement on Thursday and marched peacefully through the streets. As the gunfire began, many witnesses say they didn’t recognize the sound. By all accounts, it was the police, rushing toward visibly ricocheting bullets and pushing civilians out of harm’s way, that saved many of their lives.

Five officers paid the ultimate price for their bravery. They are: Brent Thompson, 43; Michael Krol, 40; Patrick Zamarripa, 32; Lorne Ahrens, 48; and a fifth officer identified in media reports as Michael Smith.

“Weeping may endure for a night,” Bishop Jakes continued, quoting Psalms, “but joy cometh in the morning. America, it’s morning. It’s time to wake up out of our sleep.”

Bishop Jakes was joined by Dallas Imam Omar Suleiman, Rabbi David Stern of Temple Emanu-El of Dallas, and five Dallas pastors. Texas Sen. Royce West (D) also addressed the crowd, leading a prayer in which he asked the crowd to join hands in a pledge to curb racial discrimination and violence.

Dallas Mayor Mike Rawlings, who was greeted by resounding applause, began by addressing his city’s bloody history. “For years, people around the world saw our city through the lens of the Kennedy assassination,” he said. “Through that tragedy, modern day Dallas was born, a great city. Those of us who love this city always knew there was so much more to Dallas than what happened on that day in 1963.” 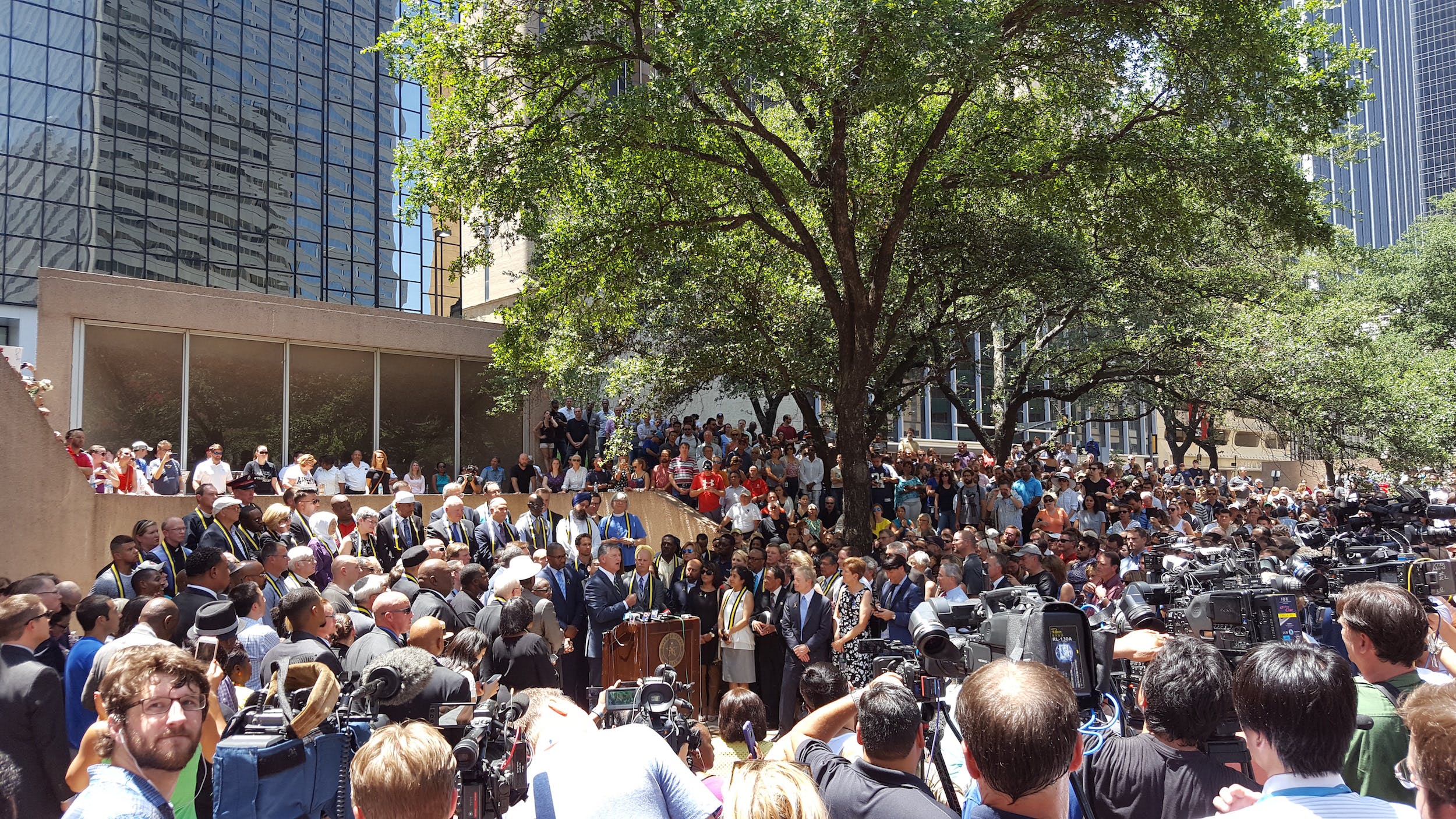 “Intelligence is the ability to hold two opposing ideas in the mind at the same time and retain the ability to function,” the mayor said, paraphrasing American writer F. Scott Fitzgerald. “I believe we can do that. The question is, can we as citizens speak against the actions of a relatively few officers who blemish the reputation of their high calling—and at the same time support and defend the 99 percent of officers who do their jobs professionally, honestly, and bravely. This is the men and women who were shot last night. I think we can, and I think we must.”

Rawlings continued by saying that Dallas, as a community, must “truly and deeply” understand the pain caused by racial discrimination. We must put aside yesterday’s battles, he said, holding on to “grace and forgiveness” in order to build a city, and the country, dreamed about by Dr. Martin Luther King, Jr.

“We will not shy away from the very real fact that we as a city, as a state, as a nation are struggling with racial issues,” Rawlings said. “They continue to divide us. Yes, it’s that word race, and we’ve got to attack it head on.”

Dallas Police Chief David Brown, who appeared in uniform and a dark pair of sunglasses, noted solemnly that his police officers have become “comfortable” with not hearing much gratitude from the citizens who need them most. “We’re used to it,” he said. “So, today feels like a different day than the days before this tragedy—because you’re here. Because Dallas is a city that loves. Our officers want to say that we’re hurting. We need this community. We need citizens to show officers that they appreciate their sacrifice.”

Brown called the attack a “well-planned, well-thought-out, evil tragedy,” and vowed his department would not rest until “everyone involved is brought to justice.” In response to an overwhelming and “heartfelt” show of support from the community, he added: “Our officers are going to need counseling for a very long time. My officers are going to need to hear from you more than just today, that you appreciate their sacrifice.”

“We are determined,” Brown concluded, “to not let this person steal this democracy from us.”