No officers were injured.

Update 12:39pm CT, June 13: The Dallas Police Association has confirmed that the suspect is dead. This story has been updated for clarity.

A lone gunman in an armored van was killed by a Dallas SWAT sniper Saturday morning after firing a gun at officers outside police headquarters and ramming a police vehicle.

After the suspect drove away, as many as five suspicious packages were discovered near the police department’s building. One detonated when officers attempted to move it with an explosives ordnance robot. Another found underneath a van was intentionally detonated. Police later confirmed via Twitter that all the packages near the department had been cleared.

Bullets struck several police cars but no officers were injured.

This is where the Explosive Ordinance Robot attempted to move one of the bags. #DallasPDShooting pic.twitter.com/mgbgytBhWv

Picture of squad car that was shot at. No officers were injured. pic.twitter.com/vfT2nCiJzP

The suspect was then chased southeast from the police headquarters at 12:45am CT to a Jack in the Box fast food restaurant in Hutchins, Texas, roughly 10 miles away. A brief exchange of gunfire took place in the parking lot. A SWAT team then arrived. Shortly after, an officer disabled the suspect’s vehicle with a .50 caliber rifle.

According to Police Chief David Brown, it’s believed only a single shooter was involved. At least one witnesses said they heard gunfire coming from different locations. Another told police that one of the suspects didn’t get back into the van before it fled. Brown said as many as four suspects could be involved. 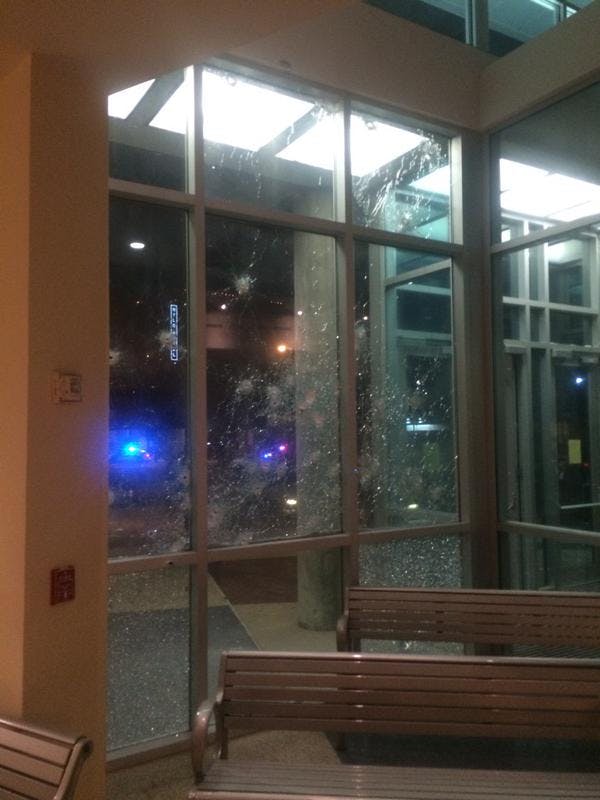 The suspect reportedly identified himself as “James Boulware” to police over the phone. “This is the name given, however it has not been confirmed that this is the person we are talking to,” Brown said. The suspect claimed over the phone that police had taken his child and called him a terrorist.

In May 2013, a man in Dallas with the name James Boulware was allegedly arrested after obtaining firearms and body armor, and threatening his family and others, according to local media.

Early Saturday morning, Twitter users identified a May 28 advertisement on Facebook for a vehicle that appears similar to the one involved in the shooting. The van online was reportedly sold recently in Georgia on eBay. At press time, officials were investigating, but had yet to confirm, any connection between the shooting and the van sold online.

“Preliminarily, we believe this suspect meant to kill officers and took time to discharge that weapon multiple times to accomplish [that],” Brown said, adding that officers encountering the van were seconds from being killed. “We barely survived the intent of this suspect.” So far, they haven’t found evidence online that speaks to why the suspect shot at police. Brown reiterated that the suspect’s identity had not been confirmed.

Update 9:40am CT, June 13: Officials said a SWAT sniper would try to take out the window by firing shots at it. A robot near the passenger door is also trying to shatter the glass. An attempt to breach the window with an explosive failed, according to Maj. Max Geron of the Dallas PD. Officials confirmed that a SWAT sniper had previously fired two .50 caliber bullets into the van’s engine. A third round struck the suspect through the front window and he’s now believed dead.

Update 12:34pm CT, June 13: ATF destroyed the vehicle in a controlled explosion just after noon. The suspect, who was presumed dead, was still inside, according to the Dallas Police Association.