How not to write about Chelsea Manning and prison

The Daily Beast's op-ed about Chelsea Manning in jail is a tasteless prison fantasy.

The Daily Beast ran an op-ed titled “How Will Chelsea Manning Be Treated in Prison,” written by a former federal prison inmate, Mansfield Frazier. The piece is a personal one, and he begins with this scene:

The most bloodcurdling sound I’ve ever heard came from the throat of a prisoner as a 10-gallon vat of boiling-hot cooking oil was dumped on his head in the chow hall at Kentucky’s Ashland federal prison. The man—a huge, strapping bodybuilder—had slapped a small, effeminate gay inmate two days prior for laughing at him as he busted out of a poker game.

Frazier’s piece attempts to sketch out how Manning—who today announced she will be living life as a woman, and possibly undergoing hormone replacement treatment while imprisoned at Fort Leavenworth—might fare in prison as a transgender person. Frazier says that in his “personal experience serving time in federal prisons—and in contrast with the horrible images of repeated sexual assault that many have no doubt conjured up already—transgender and gay inmates are often treated quite well.”

Of course, Frazier was in a federal prison, and Manning will be in a military prison.

In the very next sentence, Frazier cites a 2012 report from the Department of Justice and adds, “more than a third of transgender former inmates were sexually assaulted in prison. The same report found that transgender women are 13 times more likely to be assaulted than other inmates.” An editor’s note was added to the blog after publication, clarifying that it is an opinion piece, and inaccurate. The editor added actual prison rape statistics, which were largely left out of the original.

Update: The Daily Beast cut two controversial sections of the op-ed, reproduced below. In the second paragraph, the author claims gay men often return to prison because of the sex: 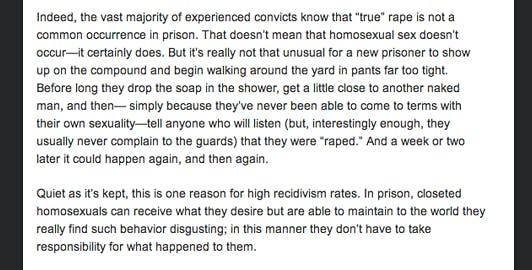 The piece still comes off like a tasteless prison fantasy, or a pitch for a new TV show. Frazier goes on to toss out potential “relationship” situations in prison, and explains how a particularly savvy inmate could become “prison rich” via sexual favors. This is the well-scrubbed picture of prison-rape culture. It’s a business, even.

Many are calling for the removal of the piece:

Hey @thedailybeast! Good editors note but you spelled “Sorry for posting hateful lies about rape and we are closing down forever” wrong.

By tomorrow morning that Daily Beast article will consist of the word “The” and a seven-part, 2500-word editor’s note.

The last paragraph is especially awful:

One thing is almost a certainty: celibacy probably won’t be an option for Chelsea Manning, but she will have choices in regard to how she wants to spend her years behind bars. With that said, we need to keep in mind that one person’s prison is another person’s palace. Chelsea Manning could become the queen bee.

Yes, prison might be a palace for Manning. A palace where celibacy isn’t an option, which is another way or saying Manning might be raped, or suggesting she might be OK with that, with her “queen bee” status and all. Worse than the tawdry, sensational tone of the piece, it added nothing to the conversation about prison abuse, rape culture, or transgender issues.