Daily Beast retweets calls for writer of Olympics catfishing story to be fired, then deletes them

Yesterday, the site published a story that may have outed LGBT Olympians, then retracted it. Has the Beast seen the error of its ways—or not?

Early Friday morning, the Daily Beast, which caught backlash yesterday for publishing a story that outed a handful of Olympians competing in Rio, retweeted calls from Twitter followers to fire the journalist behind the piece. Nico Hines, who is covering the Olympics for the Beast, admitted in his now-deleted article that he set up a fake profile on the gay social network app Grindr to entice athletes staying in the Olympic Village.

When the Daily Beast announced in a tweet that it was removing the article and that “we were wrong” and “will do better,” one Twitter follower replied, “Until @NicoHines and his editor are out of a job you won’t be doing better.” Another called Hines “homophobic” and insisted he be fired for knowing “damn well what he was doing.”

The Daily Beast retweeted those tweets, but have since deleted them. An email to the Daily Beast asking for comment was not returned by press time. 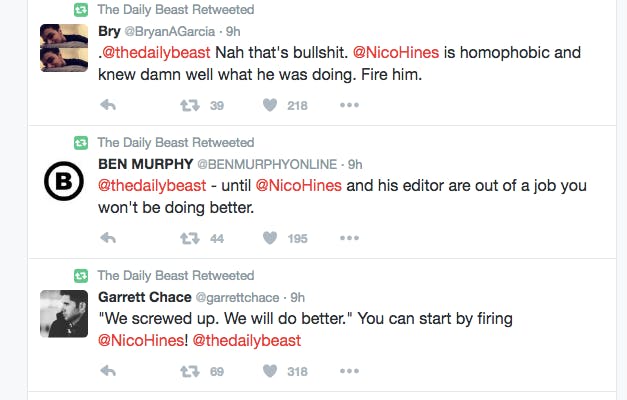 A note from Daily Beast editors now replaces the text of the original story. Part of it reads: “Today we did not uphold a deep set of The Daily Beast’s values. These values—which include standing up to bullies and bigots, and specifically being a proudly, steadfastly supportive voice for LGBT people all over the world—are core to our commitment to journalism and to our commitment to serving our readers.”

Although the names of the athletes Hines interacted with weren’t included in the story, there were plenty of identifiers. In fact, Slate writer Mark Joseph Stern said that he was able to determine five of the described athletes after spending a little time googling. And while the article was heavily edited a few hours after it was published to remove those identifiers, which included the names of home countries, nothing on the internet, as Stern points out, is ever really gone.

That’s particularly troublesome, considering some of those who responded to Hines’s profile live in places that outlaw homosexuality.

Hines, who is straight, married, and with kid, wrote that his intention was to find out if an “average Joe” could find his way into the “hotbed of partying athletes, hookups, and sex, sex, sex.” Although he set off on his mission using a handful of apps, including Tinder, Bumble, and Jack’d, he chose to focus his piece on the action he got from Grindr. Why? Because, as he writes, it “proved more of an instant hookup success.”

In fact, the story was originally titled “I Got Three Grindr Dates in an Hour in the Olympic Village.” It was later edited to the decidedly less click-bait-y, “The Other Olympic Sport in Rio: Swiping.”

People were quickly upset. Openly gay Olympic freeskier Gus Kenworthy tweeted that the article was “shitty.” Amini Fonua, an out competitive swimmer from Tonga, posted a photo of his bare behind on Instagram, tagging Hines and the Daily Beast with this caption: “If what you were looking for on Grindr was hot ass (and I don’t see any other reason why you’d be on there) here you have mine in all its proud glory. Now, kiss it and fuck off.”

Grindr told the Daily Dot it was not happy that the app was used as bait in a story. “In instances like this, once notified, the account would be suspended immediately,” a Grindr spokesperson said via email. “We consider ourselves a safe space for the gay world, and while everyone is welcome, it is with the understanding that this is a community, not a novelty for reporters to troll.”

Meanwhile, Hines has said nothing about the controversy. He declined to comment to CNN, and his Twitter feed, although bombarded with angry mentions, makes no reference to his story.

Ken Miguel, the vice president of broadcast at the NLGJA, the association LGBTQ journalists, told the Daily Dot that he’s not surprised about the controversy, though he is disappointed.

On the journalism side of things, Miguel says Hines’s actions were “unethical” and suggests that any other work he’s ever done should be called into question. “You don’t have to be an LGBTQ journalist to see that. Any journalist should know that they are not allowed to lie.”

Furthermore, he says, it’s simply dangerous to publish a story like this. “LGBTQ people are disproportionately at risk for higher rates of suicide and higher rates of bullying,” he says.

According to the Trevor Project, gay and lesbian youth are four times more likely to attempt suicide as their straight peers. LGBTQ people are “more aware of coverage,” Miguel says. “Words matter.”