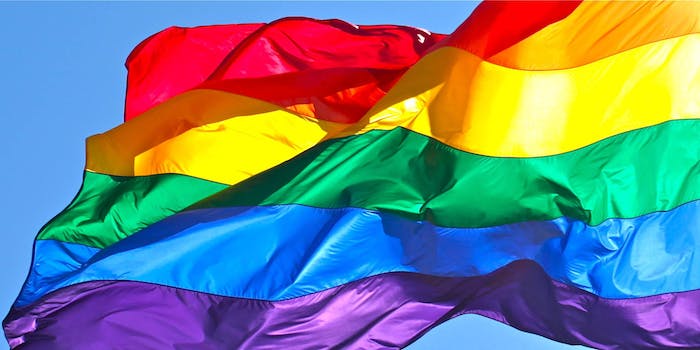 'In the spring, when I hang the flags up, I would be proud to hang yours up.'

The holidays are a time for families to exchange news, whether it’s announcing an engagement, a pregnancy, or coming out. And while we hope those exchanges will be happy, sometimes they can be the source of a lot of stress. Which is why this one dad’s reaction to his daughter’s request for a pride flag is so heartwarming.

My dad got me the best Christmas present I have ever received this year. pic.twitter.com/uGcvWdsUxI

Dakotah Whitcomb told BuzzFeed she “accidentally” came out to her dad as bisexual earlier this year, and that he was totally cool with it. But on Christmas he showed just how proud he was of his daughter. “I have the Marine Corps, grandpa & mom have the Navy, and Darr has the Army. So it makes sense that you would want a flag to represent something you are a part of,” he wrote her. “I present you with this flag, to display how you would like. In the spring, when I hang the flags up, I would be proud to hang yours up.”“I knew I was accepted by everyone in my family,” said Whitcomb. “But this just drove it home.” She also thanked everyone who shared her dad’s message.

I just want to thank everyone for their kind words! I didn't think it blow up, I just wanted to show the most touching gift I've gotten!

I told my dad about how much attention this has gotten and is shocked and says he can't wait to hang up the flag!