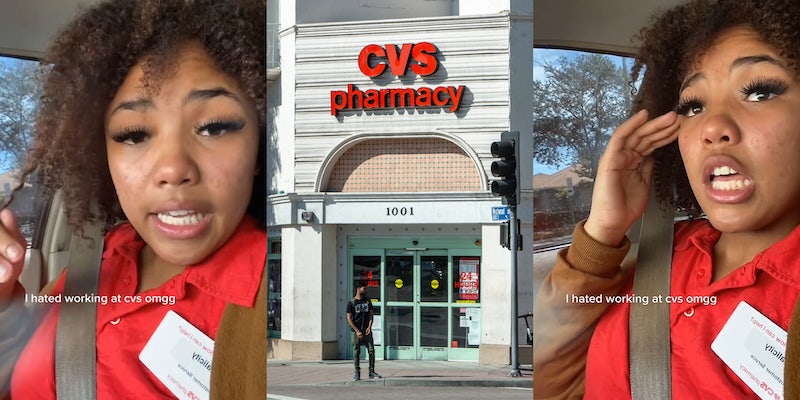 ‘I’m off at 3, and I clocked out at 3’: CVS worker gets in trouble for clocking out on time

What time is one supposed to leave work? For most people, the answer would seem clear: the end of one’s scheduled time.

However, in reality, this is rarely the case. A 2021 global survey cited by the BBC reported that “one in 10 people say they work at least 20 hours a week for free,” ranging from something as simple as taking work phone calls off the clock to performing the full tasks of one’s job while technically off hours. Similarly, a 2019 study detailed by CNBC reported that the average American worker stays late “2.5 days a week, meaning most go home when scheduled only about half the time.”

As a response to this growing trend has come phenomena like “quiet quitting” and “acting your wage,” terms used to describe the experience of only fulfilling one’s job requirements and nothing more.

While TikTok user Falicity (@falicityshyannn) hasn’t identified with the quiet quitting movement, her story of being reprimanded for leaving at the end of her shift has struck a chord with users across the platform.

In a video with over 1.2 million views, Falicity says she was approached by management after clocking out at the end of her shift.

“He’s talking about, ’So why’d you clock out?’” she recalls. “Because it’s my time to fucking go!”

As the video continues, she explains that the manager’s true issue was that she was leaving before someone came to replace her. But Falicity says that is a problem with management being shifted onto the employee.

“Y’all are supposed to be up there. Y’all are the management. You made my schedule. I get off at 3. You know I get off at 3!” she states. “Why you wasn’t up there? I clocked out already!”

“They not even going to pay you for being there longer than your scheduled time,” another claimed.

“If they never wanted any gaps – they would overlap employees coming/going by an hour but they won’t to save money so BYEEEEE,” a further user shared.

“This is what I don’t understand about retail jobs. If you late you get reprimanded but it’s cool for you to stay pass your time to go home,” an additional TikToker observed.

Other users told similar stories from their work experiences.

“Domino’s tried to tell me I had to work 3 hours over my extra shift because they didn’t have enough people. sorry for you lol,” a commenter remembered.

“A manager once told me ‘just cause you off at 10 don’t mean you gone always leave at 10..’ Yeahh okay,” a second recalled.

“I had a manager say your out time is a suggestion,” another commenter claimed. “I said does that mean so is my in time? My whole schedule then? Inquiring minds.”

The Daily Dot reached out to Falicity via Instagram direct message.