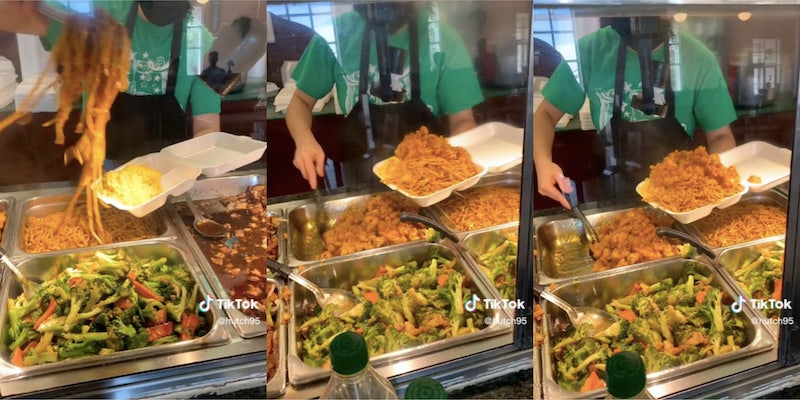 ‘I wish Panda Express would do this’: Customer complains about receiving too much food at mall Chinese restaurant

'One plate feeds a family of six. Best deal in town.'

A user has sparked a discussion on TikTok after sharing a video in which a customer is served an incredible amount of Chinese food.

In a clip with over 2.6 million views, TikTok user Hutch (@hutch95) shows the serving size at a Chinese fast-food restaurant. According to the video’s hashtag, the location is the Magnolia Wok, found inside Florence, South Carolina’s Magnolia Mall. Over the course of 45 seconds, the employee loads in gratuitous portions of rice, chow mein, and chicken.

The customer audibly balks at the amount of food, repeatedly saying “that’s good” and “take some of that off.” By the end of the serving, the styrofoam container is so full that it cannot completely close.

In the comments section, Hutch says that “this plate an egg roll and two drinks were $20.”

Rather than being horrified, many users in the comments expressed envy about the massive amount of food the customer received.

“Why would you tell them to stop?!” one user asked. “I’d be like ‘I don’t like my noodles and meat touching, can I get 2 plates.'”

“This the same energy we need at chipotle,” another added.

“Please no one tell them about inflation,” a third stated.

However, some agreed that the serving size was indeed too much, with many speculating that they may only serve such large portions because it was nearing the end of their workday.

“They trying to get rid of it,” one user offered.

“I’m ngl i would say that’s enough the box can’t even close df,” a second shared.

That said, some users who claim to be from the area said this was a typical serving size for the business.

“Love when my hometown mall pops on my fyp…swear they trynna feed you for atleast a week,” a commenter noted.

Photos from the restaurant’s Yelp page confirm that this is a typical serving, with many users sharing photos in which Chinese food is spilling out of their takeaway containers.

Furthermore, this isn’t even the first time that Magnolia Wok has gone viral for the same reason. In 2020, the Facebook page Sauce Carolina documented another instance in which Magnolia Wok overfilled a takeaway container, garnering over 182,000 views in the process.

The prospect of so much food for such a low price excited many users, with many saying they would attempt to stretch the portions for as long as they would last.