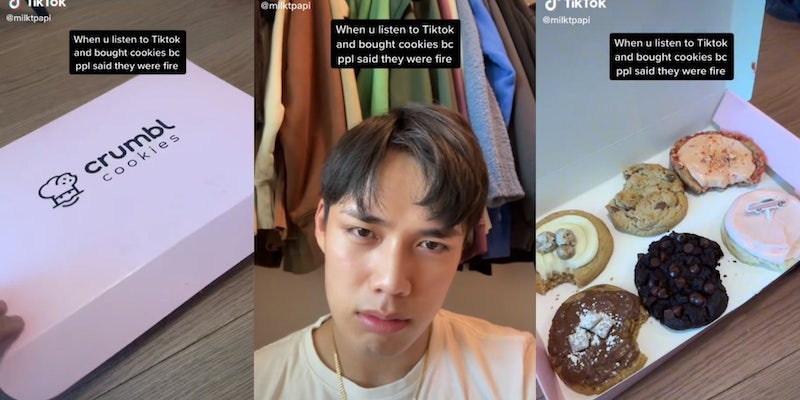 ‘$30 for 6 of the most ATROCIOUS cookies I’ve ever had in my life’: Customer slams Crumbl Cookies for being overpriced, sparking debate

'I’m surprised how people don’t get sick eating these.'

The internet is no stranger to Crumbl slander. Recently, the popular cookie chain has been called out for utilizing what appears to be store-bought Betty Crocker mixes in some of their desserts. Other folks had difficulty wrapping their heads around the fact that Crumbl Cookies cost around $4 each, and the brand has been consistently blasted for not being worth the money.

If you’ve spent a considerable amount of time on TikTok, then you’ve probably come across a post or two about Crumbl. Modern Retail wrote about the brand’s efficacy in utilizing the popular social media app in bringing in more customers and helping the Utah-based franchise expand all over the country. However, a recent viral post from popular content creator Newt (@milktpapi) shows that both he and the throngs of his followers aren’t buying into the Crumbl hype.

The food-centric TikToker has millions of followers and his latest clip about the cookie chain has been liked over 140,000 times and clocked in over 1,000 comments.

“When u listen to Tiktok and bought cookies bc ppl said they were fire,” he wrote in a text overlay of the seven-second clip. The video begins with him looking forlorn into the camera, then the clip cuts to a box of six Crumbl cookies, each of a different variety, each one with a bite taken out. The clip then cuts back to Newt holding his face in desperation, clearly disappointed with his purchase.

He writes in a caption for the clip: “$30 for 6 of the most ATROCIOUS cookies I’ve ever had in my life.”

There are a number of folks who have reviewed the cookies online and said that they were overpriced and not as tasty as they had hoped. Others have blasted the treats as being overly sweet, something that was echoed in the comments section of the creator’s TikTok.

“I love that u tried all of them like u really held out hope that at least 1 of them had to be good,” one viewer commented.

“The way ppl defend crumbl cookies is crazy, like obv cookies r sweet but should I be having cavities after one bite? no, there’s a thing as ‘too sweet,'” another wrote.

Some commenters even said they worked at Crumbl and they themselves admitted that the cookies weren’t as good as some folks would lead you to believe.

“I work at crumbl and they’re DEFINITELY overhyped,” one viewer wrote.

“FINALLY !!! I’m not the only one who thinks this !!! They are extremely over hyped for sure,” another agreed.

Others even said that Subway’s cookies are not only more affordable than Crumbl’s, but taste way better.

It seems that Newt was well aware of the fact that Crumbl was “caught” using Betty Crocker mix for their cookies. When a user asked if he would create a video of him making cookies, he had this to say: “DO U GUYS WANT ME TO?? we’ll make them and not even have to use Betty Crocker mix.”

And while there are tons of folks who have expressed their disdain for Crumbl — after all, taste can be subjective — there are some outlets that have given glowing reviews of the brand’s offerings. The Silicon Review wrote: “Crumbl only uses the highest quality ingredients in each batch. The difference is obvious by your first bite! The brand’s experience and offering is truly gourmet.”

The Daily Dot has reached out to Newt and Crumbl Cookies via email.