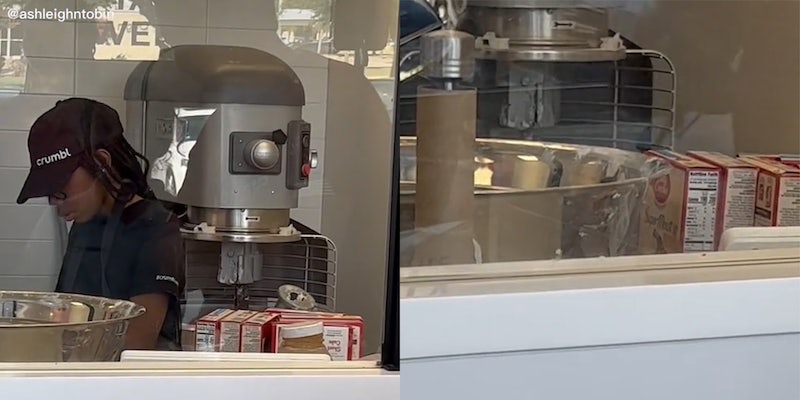 'So you're telling me crumbl uses Betty Crocker cake mix.'

A customer at Crumbl Cookies spotted Betty Crocker mix at the workstation of the store, sparking speculation the chain doesn’t use an in-house recipe.

However, a representative for Crumbl Cookies told the Daily Dot in a statement that it uses cake mixes “from time to time” in order to enhance the flavor and texture of our cookies.” The statement called the practice “consistent with other brands in the food & beverage industry.”

“We are proud of the ingredients we use in our cookies enough to have the entire mixing process visible to all customers as we bake-up the best cookies in the world fresh at each Crumbl location,” the statement continued.

The speculation started after Dallas-based TikToker Ashleigh (@ashleighntobin) posted a video, which as viewed 3.4 million times, featuring several boxes of Betty Crocker mix on the counter of a Crumbl Cookies workstation.

“We’ve been bamboozled,” a commenter said in agreement.

However, there were some TikTokers who pointed out that it’s standard practice for a lot of bakeries to use a boxed cake mix.

“Sorry to inform you but alot of professional bakers also use boxed cake mix, you can add stuff like yogurt to make it better but perfect measurements,” one said.

“This is a super common practice when baking. big companies can mass produce the perfect mix, where as making it by stratch is harder and more inaccurate,” another argued.

One user thought it was ironic Crumbl Cookie was suing other cookie companies for using branding akin to theirs while it used boxed mixes from another name brand, like Betty Crocker. In July of 2022, the Daily Herald reported Crumbl stood by its “decision to sue cookie competitors.”

The outlet reported that Crumbl “filed lawsuits in U.S. District Court in Utah on May 10 against competitors Crave Cookies and Dirty Dough, seeking an injunction and monetary compensation alleging that both companies copied multiple elements of Crumbl’s branding.”

The cookie company’s co-founder, Jason McGowan posted a statement on his LinkedIn page regarding the business’ decision to sue both Crave and Dirty Dough. “While we have remained silent as the process moves through appropriate legal channels, the defendants have taken to social media to spread misinformation and garner public sentiment…The defendants both formed businesses copying Crumbl’s processes, trademarks, and trade dress in a confusingly similar way,” he wrote.

Crumbl became the subject of social media controversy after former employees of the company spoke out against the company, with one recently alleging they never received any formal training or guidance during their time with the brand.

The Daily Dot has reached out to Ashleigh via TikTok comment.

Update: Sept. 22, 2022 4:24pm CT In response to a request for comment from the Daily Dot, Crumbl Cookies clarified they sometimes they use cake mixes as part of their ingredients.

“Thanks for reaching out about this! As is consistent with other brands in the food & beverage industry, we use a variety of ingredients — including cake mixes from time to time — to enhance the flavor and texture of our cookies,” a spokesperson wrote in an email. “We are proud of the ingredients we use in our cookies enough to have the entire mixing process visible to all customers as we bake-up the best cookies in the world fresh at each Crumbl location.”