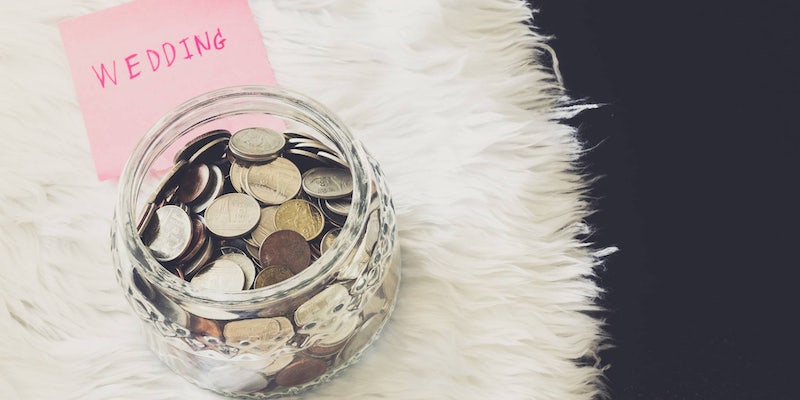 Do we really need a crowdfunding site specifically for weddings?

For when you only have $30k to spend on a wedding, and that just won't do.

The “Wedding Industrial Complex” is more of an ouroboros. As a society, we’ve decided weddings are important religious, community, and emotional events. The pressure is on to make them “nice.” Add in vendors insisting what is required for your “perfect day,” influences from what you see at other weddings, and family members threatening to never talk to you again unless you invite all your third cousins, and all of a sudden everyone is throwing blow-out galas.

Which is how we arrive at PreGifting.

Launched earlier this week, PreGifting is a crowdfunding site specifically designed so guests can pay for your “dream wedding.” Instead of registering for things like blenders and sheets, couples’ friends can essentially register them for a wedding, giving them their monetary gift beforehand instead of on the day of. And with the way the site is written, it’s safe to say the target audience is engaged couples looking for others to fund their weddings, not friends secretly raising money behind their backs.

In a video explaining how the site works, PreGifting sets up a tragic scenario, in which “Kevin” and “Noelle” are getting married. Their dream wedding costs $40,000 but they only have $30,000. “Option 1 is to cancel the horse and carriage, get daisies instead of roses, and tell Uncle Ted him and Aunt Jane are not invited.” Option 2 is to have guests chip in for the wedding.

The problem here is, if you’re trying to inspire pity, Option 1 doesn’t actually accomplish that. Poor Kevin and Noelle! They only have $30,000? Everyone knows it’s illegal to get married without a horse and carriage in Obama’s America! Let us hold our hands and pray that they shall never have to set an eye on a single daisy in their blessed union.

While PreGifting may be one of the first crowdfunding sites made specifically for weddings, crowdfunding weddings has been a trend for some time now—and it’s easy to understand why. According to the Knot, the average cost of a wedding in America is over $32,000, with fees for ceremony and reception sites continually rising.

Plus, not everyone looking for monetary wedding help wants to upgrade to horses. Maybe the couple had money to pay for a wedding but had to spend it all on emergency medical bills. Maybe they’re living below the poverty line and would just love their friends and family to chip in for a potluck celebration in the backyard. Maybe, since people are going to be spending money on gifts anyway, they’d prefer to have a nicer wedding (or a honeymoon) than a dozen kitchen appliances they’ll never use.

But the expectation that weddings include long cocktail hours, three-course dinners, and dancing into the wee hours is fairly new for us common folks, and were rites often reserved for the upper crust of society. 1950s etiquette queen Amy Vanderbilt alludes to this in her Complete Book of Etiquette, saying things like, “It is not essential to have music at a wedding reception, especially if quarters are small and guests numerous,” and later calls having a full orchestra “pretentious.”

In a lot of ways, it’s great that the fancier parties have become more available to everyone. However, that availability has quickly turned into a requirement, and instead of throwing the wedding they can afford, couples are scrambling to throw the weddings society expects them to have.

This results in some really strange behavior. Some people are suggesting couples take out loans to pay for their weddings, and correspondences of newlyweds demanding guests “cover their plate” now regularly go viral. It’s enough to make Emily Post clutch her pearls.

A wedding is ultimately a party thrown for guests. And while in more traditional circles, it’s thrown by the parents of the couple, today, it’s much more common for the couple themselves to foot the bill. So you can see how it’s easy for those bill-paying couples to think, “Well, Aunt Jane is buying me a $100 coffee maker anyway, why not cut out the middleman and have her put that $100 to my DJ instead?” But unless you’re explicitly throwing something like a potluck (which even Emily’s great-great-granddaughter Lizzie Post says is totally fine), it’s the job of a host to provide for the guests, not the other way around.

This is not to say that wedding shaming is OK, either. Because even though weddings have gotten bigger and bigger, there is no shortage of people out there ready to tell every engaged couple that it’s all a waste of money, to just go to the courthouse or elope and save their dollars for something “more important.” It’s no one’s place to tell you your wedding isn’t important, but in the words of Amy Vanderbilt, “The elaborateness or simplicity of the wedding is of no real consequence. It is the spirit in which we marry that is truly meaningful.”

You should have a wedding if you want one. But also, c’mon, if you have $30k to spend, don’t fret about some damn daisies.