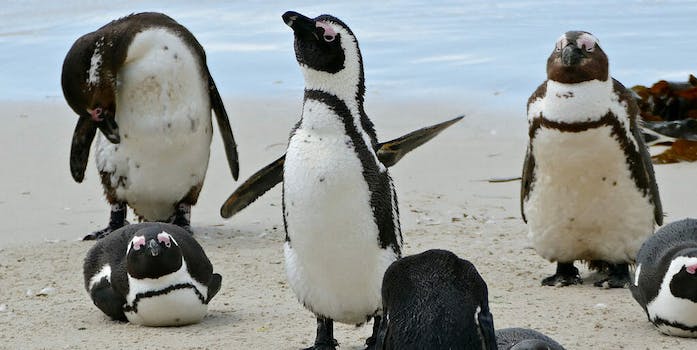 Zoos turn to crowdfunding to save this adorable penguin species

More than $60,000 has been raised for the endangered birds so far.

At just over two feet tall, African penguins are optimized for swimming; they spend most of their time in the water and dive for an average of 2.5 minutes as they hunt for their fishy prey. They make a distinctive donkey-like noise and are apparently awkward as hell on land. Oh, they are also just pretty cute.

African penguins, found nowhere outside their native shores of South Africa and Namibia, are the only penguin species that breeds in Africa. They are also an indicator species—how they are doing can give researchers a sense of the ecosystem’s overall health — which is why it’s scary that they may not be around much longer. The International Union for Conservation of Nature considers the species endangered and their population is declining fast — in 1900, there were about 3 million African penguins, but by 2009 that number had dropped by 97 percent to 80,000.

A lot of the species’ issues amount to a lack of breeding sites. African penguins dig their nests in guano, and the monogamous pairs return to the same site year after year to breed. Unfortunately, companies have been mining guano for years to use as fertilizer. As a result, the picky penguins have no safe place to breed, and their numbers continue to decline.

A team of researchers affiliated with the Association of Zoos and Aquariums (AZA) has a solution. On Wednesday, they launched a Kickstarter campaign to fund 1,500 artificial nests that could help the African penguin bounce back. They spent three months testing 15 different prototypes in zoos and aquariums to figure out the ideal parameters for penguin nests. Now that they have the final design, more prototypes are going into these artificial penguin habitats for additional testing. If the project is funded, each of the nests will be made individually by hand in South Africa and Namibia, then gradually installed in 12 of the penguins’ breeding grounds over the next six to 10 months. They hope that safe nests will help the penguins produce more offspring, buoying their numbers.

The AZA is taking the conservation of African penguins pretty seriously. In 2014, the organization brought together South African conservationists, bird experts, nonprofits, academics, and government representatives to plan eight different projects to save the African penguin. Producing and installing artificial nests was one of these projects, experts’ bet in the high-stakes game of the penguins’ survival.

At the time of publication, the campaign has raised about $60,000, more than a third of its overall goal. The team has another 29 days to raise the total $150,000 they need for the project.