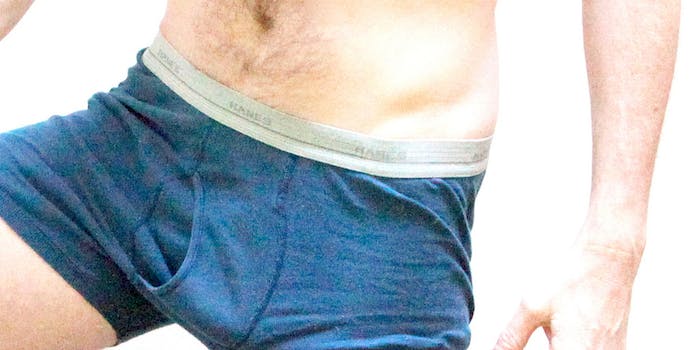 This Tumblr will give you an honest critique of your junk

This Tumblr blog has one purpose: to improve the overall quality of groin photography.

During Anthony Weiner’s recent new side career as a world-famous sexter, many obvious questions have already been asked. For example: “Carlos Danger,” really? And why didn’t he use Snapchat?

But has anyone stopped to wonder about the artistic quality of those infamous crotch selfies? To the connoisseur, a bird’s-eye view of someone’s tented gray underwear may not measure up in terms of pure finesse or style.

Luckily, Critique My Dick Pic is here to help.

This Tumblr blog has one purpose: to improve the overall quality of groin photography. Also, it gives every sign of being 100 percent genuine. As the dick-pic critic explains in the bio:

send me your dick pics, & i’ll critique them with love.

‘with love’ is an important addendum. i’m never going to shame you about the size of your dick or what it looks like; i’m not about that life. i will, however, be ruthlessly honest when it comes to things like angles, lighting & general tone. i’m trying to help you improve, because in all likelihood your dick pics are artless & dull.

this is a fun dick pic! it’s got a nice amount of movement to it & i like the playful, “hey, look at this” lifting of your shirt. i imagine that outside the frame of this pic is your face with a shit-kicking grin on it, & i can feel that in your dick pic. i saved this picture as dick pic shawing.jpg on my computer & that’s what i think whenever i look at it: sha-wing!

That dick pic got a B+ grade, by the way.

The Tumblr also answers anonymous questions, if you’re too nervous to send in a dick pic of your own. So in general terms, we’ve already learned that bathrooms and bedrooms are both good locations for genital portraiture, but not if you have an unsightly pile of dirty laundry in the background.

Thanks, Critique My Dick Pic. You’re making the world a better place.