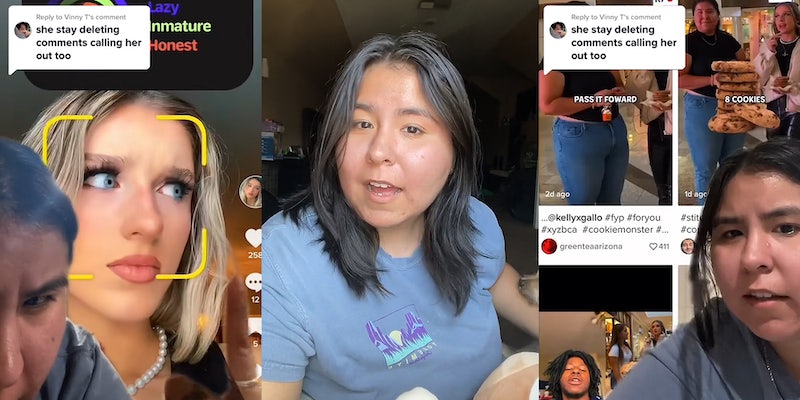 ‘You posted that knowing it’ll go viral and that I’m going to get shamed’: Woman calls out creator for setting her up in staged content

'I had no idea I was being set up like that... I took it because she told me to take it.'

With virality being easily achievable on TikTok, creators are using it to their advantage to call out influencers who often get away with questionable content. More TikTokers are using the app to keep influencers they deem problematic accountable, and viewers are supporting them all the way.

The latest to join the accountability train is TikToker Annette (@bruvw0tt), whose original video calling out a TikTok creator received over 35 million views.

She claims a creator used her in their TikTok for views and set her up to receive hate comments online.

Annette shows a short clip of the original TikTok, which is now deleted, posted by Kelly (@kellyxgallo). In the video, Kelly asks Annette if she’d like to take the eight cookies she’s offering her, or “double it and pass it forward.” The question seems to follow the trend of TikTokers asking random strangers if they want to accept a random item, or “double the amount” to offer it to the next person they ask.

@bruvw0tt someone had to say it and it clearly wasn’t gonna come from her. please do better and spread kindness. it’s a sad reality to see but thank you for those who defended and supported 🤍 #greenscreen #mentalhealth #temecula #passiton #greenscreenvideo ♬ original sound – .

In the video, Annette says she’ll take all of the cookies. What the video doesn’t show, Annette says, is that the entire thing was completely staged, and it was Kelly who approached her at the mall and told her what to say.

Annette agreed to do the video since she saw no harm in it, however, what she didn’t anticipate was the fat-shaming comments she would receive on Kelly’s video.

“Kelly, you know you were in the wrong for that,” Annette says in the clip. “You know perfectly well what you’re intending yet for you to put in your comments, ‘don’t shame, guys.’ Like you posted that knowing it’ll go viral and that I’m going to get shamed.”

Annette believes Kelly knew the video would blow up since most of her other content does not get as many views as the video with Annette did. Before the video was taken down, Annette says it received 500,000 likes, with the majority of comments trolling her. The video was also duetted several times by other creators shaming her.

“I had no idea that I was being set up like that,” Annette continues in the video. “So for all those comments that said, ‘I knew she would take it,’ I took it because she told me to take it.”

Annette clarifies that she reached out to Kelly via Instagram before she publicly called her out asking her to take the video down, which she says Kelly didn’t see.

“Someone needs to be held accountable and she clearly can’t hold herself accountable,” Annette says. “I hope your one minute of fame was worth it. Putting someone down really sets the bar for you.”

In the comments section, Annette received an outpouring of support from thousands of viewers. Many applauded her for speaking up and standing up to Kelly.

“I’m so glad someone is calling these people out. Sorry this happened/:,” a top comment read.

“I’m so sorry she knew exactly what she was doing,” another wrote.

“ppl do anything for clout i’m sorry she did this to you,” a third viewer said.

Kelly, who has turned her comments off and has gone private on Instagram, decided to address the accusations publicly on Thursday, the same day Annette called her out on TikTok.

Kelly’s video is simply a screenshot of a long message she sent to Annette via Instagram.

since she brought this to the internet i have to let u guys know i apologized to her last night privately. please read my apology as it shows my side.

“Since she brought this to the internet i have to let u guys know i apologized to her last night privately. please read my apology as it shows my side,” she wrote in the caption.

In her message to Annette, Kelly apologizes for the hate comments Annette received and claims she didn’t intend for people to body shame her. She explains that Annette looked friendly and was the first person she saw at the mall and that’s why she decided to approach her for the video. She continues apologizing and says she feels “terrible” about the situation. It is unclear whether Annette responded, but she did address the apology in an update video.

In the video, Annette says Kelly claimed to have received messages telling her to commit suicide, among other threatening messages. Annette adamantly clarifies that this is not something she ever wants to promote. However, she stands by her video.

@bruvw0tt since i “brought it to the internet” .. here we go again. please publicly apologize & acknowledge @kellyxgallo this is more than just you and me; this is the first step to making things right & for influencers to know they will always be held accountable. thank you 🤍 please spread kindness 🫶 #greenscreen #greenscreenvideo #fyp #mentalhealth #passiton ♬ original sound – .

“I’m not taking the video down, I don’t feel ashamed nor do I regret speaking up about something that is a common issue, sadly, on TikTok,” she says.

She calls the apology message from Kelly a “gaslit, insincere apology” since Kelly had the chance to remove the video after it received hate comments, yet she didn’t.

“I do not hate you at all,” Annette clarifies. “I wanted you to be held accountable against something that you clearly knew was wrong.”

Annette highlights that this situation is not isolated, stating TikTok trends can be harmful to others if there is no accountability.

“These trends degrading others need to stop now,” she says. “Please be kind and stand up for what’s right.”

The Daily Dot reached out to Annette via Instagram direct message.