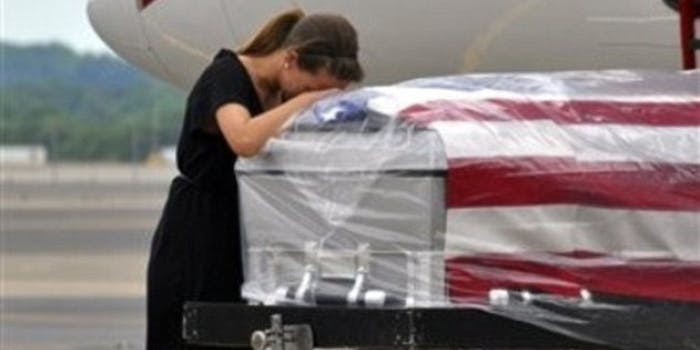 This grieving military widow is not Lea Michele

Part of the problem stems from the fact that official military photos carry no copyright protection.

Nearly two months after the death of Cory Monteith, a fake photo of his mourning girlfriend is still drawing criticism on Facebook. The photo shows a woman who appears to be Monteith’s former co-star and girlfriend, actress Lea Michele, grieving over a flag-draped casket; in reality it’s the wife of an American soldier killed in Afghanistan.

The photo appeared online just days after the 31-year-old Canadian actor, who played Finn Hudson on Glee, died of a drug overdose in Vancouver. The photo was paired with an image of Monteith and Michele announcing their engagement and made the rounds through Glee fandom in July, especially on Facebook and Twitter. While the women in the photo shares a similar hair color and style, it is actually Ashley Edens, whose husband, Jason Edens, died in April from small-arms fire overseas. The photo was taken by a photographer with the Tennessee National Guard; because it is an official military photo, there is no copyright and it can be used by anyone.

According to WSMV.com, Edens’s family was devastated to find out recently how the photo was used online, even if it was a mistake. The soldier’s mother said the family feels as if that private moment was compromised because of the meme.

“She’s saddened by the memory being stolen from her, the time with her husband. Her exact words were, ‘They stole the moment with my husband,’” said his mother, Jan Edens. “I don’t want his memory to be confused with someone else.”

The WSMV story has since spread across the Internet and has started a movement to get the photo removed, according to guardianofvalor.com. The blog was encouraging people to report the image to Facebook but as of this writing, the image had not been removed. Nonetheless, there were dozens of comments on the image belittling the poster, a Facebook page called “Best Frient.”

“Shame on you, do the right thing and take this photo down. What comes around goes around,” wrote S Renee Derosier.