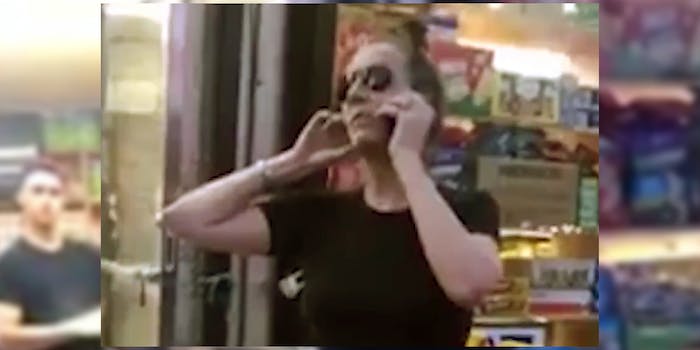 Neighbors yelled at her to go home.

A white woman now dubbed “Corner Store Caroline” was caught on video calling the cops on a nine-year-old Black boy, claiming he touched her butt.

The incident started inside a deli in Brooklyn, where the woman claimed the child grabbed her rear. The original altercation between the boy’s mother and the woman was not caught on video, but a local resident did record her calling the police and arguing with other people nearby.

At the beginning of the video, recorded and posted by Jason Littlejohn, the woman can be seen demanding on the phone, “I want the cops here right now!” As she says this, the elementary-school-aged child she accused of sexual violence begins wailing and crying for help from his mom.

It seems obvious to everyone around that a backpack-wearing child who doesn’t even have two digits to his name did not sexually assault this adult woman. As the woman, wearing aviators and stern face, yells into her phone about how the child grabbed her, people yell at her to go home. “Who would want to touch your flat ass?” one woman yells at her. As the accused child cries, Littlejohn tries to comfort him, and calls the woman “Corner Store Caroline.”

“I just was sexually assaulted by a child!” the woman yells, seemingly unaware of how ridiculous that sounds. People respond by calling her nasty and a pedophile. She laughs and smugly tells Littlejohn, “Why don’t you upload that to WorldStar?” as if that’s not racist at all.

When another white woman stops to find out what the commotion is all about, she confronts the woman who just got off the phone with the police. “What is your problem?” she asks. The woman condescendingly calls her a child, and eventually, a man has to put his arms between them to stop them from coming to blows.

It is currently not known whether the police followed up with the woman, but it looks like there’s a street full of witnesses eager to contest her claim.