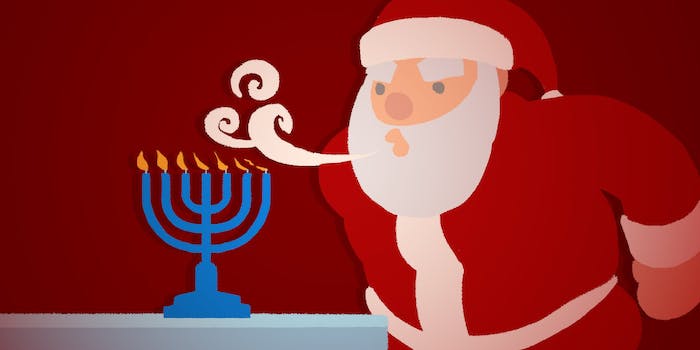 They say it's in the spirit of inclusivity. But some say it's part of the looming war on Christmas.

It’s the most wonderful time of the year—unless you’re a religious student at Cornell University hoping to spread some holiday cheer.

The “Fire Safety Guidelines for Holiday Displays” dissuades students from displaying decorations such as “metallic trees” and “combustible decorations” that could pose a fire hazard for students. But it also delves into more faith-based imagery, with a list of what is and isn’t recommended by the department based on the school’s rules of “inclusivity.”

Under the heading “Winter Holiday Displays/Decorations that are Consistent with Cornell’s Commitment to Diversity and the University Assembly Guidelines,” it lists only two items: snowflakes and trees decorated with snowflakes or other nonreligious symbols.

Under the list of “Winter Holiday Displays/Decorations that are Consistent with University Assembly Guidelines But Should be Basis of Dialogue Within Unit or Living Area,” you’ll find the following:

But the section that people are really taking issue with is the one labeled “Winter Holiday Displays/Decorations that are NOT Consistent with Either University Assembly Guidelines or the University’s Commitment to Diversity and Inclusiveness.” It reads as follows:

The guidelines instruct students to focus “on the winter season rather than a particular holiday” and to display “symbols that visually represent holidays of several religions in combination with secular decorations of the season.”

Students may display whatever they’d like in the privacy of their dorms, and these rules only apply to outward facing areas (like windows) and shared spaces. But there does seem to be an arbitrary nature to what is and is not allowed.

Others are seeing it as an extension of the supposed covert liberal agenda of ruining the holidays. One site even declared that Cornell had “dropped the biggest bomb in the war on Christmas” by releasing the fire safety guidelines.

The folks over at Cornell University are worried about inclusive seasonal displays. Thats academic code for Christmas decorations.

University spokesman John J. Carberry told the Daily Dot in an email that the fire safety document “has existed for many years and is primarily a safety reminder highlighted annually by our Environmental Health and Safety office.”

“The display guidelines included at the end of that safety message are recommendations based on previously existing policies,” he added.

Carberry said, however, that the rules are “currently under review and will be updated in the new year.” Carberry refused to comment on whether the online backlash influenced the school’s decision to review the rules.

How is a spirit of inclusiveness achieved via exclusion? It’s unclear. The best guess we can venture is that it’s a metaphor for all of us being unique as snowflakes.