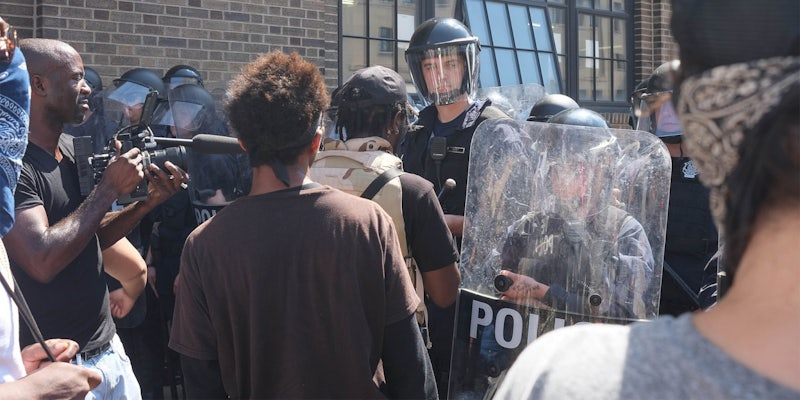 Four Missouri policemen were indicted on Thursday for beating up an undercover colleague at a 2017 protest and then covering up the crime.

Federal prosecutors say officers Dustin Boone, Randy Hays, and Christopher Myers threw an undercover cop to the ground and “kicked and struck” him during the 2017 protest, which took place on Sept. 17, following the acquittal of a policeman who shot to death a Black man. A fourth officer, Bailey Colletta, was indicted for helping cover up the crime.

All four have been suspended without pay, the St. Louis Post Dispatch reported.

In September 2017, following the acquittal of Officer Jason Stockley for the 2011 murder of Black motorist Anthony Lamar Smith, days of protests ensued in St. Louis, leading to dozens of arrests.

According to text exchanges documented in the indictment, the officers were actually looking forward to beating up protesters and wanted to “toss em around.”

“Yes I guess so, let’s whoop some ass,” Myers said in one exchange.

“We really need these fuckers to start acting up so we can have some fun,” read one of his later texts.

“Remember we are in south city,” a message from Hays read a few days after the reported attack on the defendant. “They support us but also cameras. So make sure you have an old white dude as a witness.”

The defendant, identified as L.H. in the document, was part of a group of undercover cops who were assigned by the St. Louis Metropolitan Police Department (SLMPD) “to create formations to control the crowd when necessary,” according to the document.

L.H. was attacked even when he didn’t pose any threat.

Later, when it was discovered that he was indeed undercover, Myers, Hays, and Boone alleged L.H. resisted arrest and was not compliant in order to justify their use of force. The indictment claims L.H. had worked for SLMPD for 22 years and was an experienced undercover officer. He wore clothes in a way that showed a waistband that would identify him as an undercover cop.