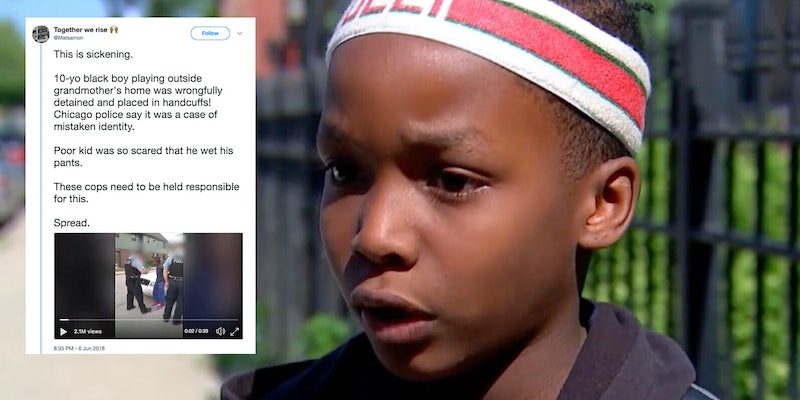 10-year-old handcuffed, detained by cops who say he ‘fit the description’

'You scarred him for life.'

The family of a 10-year-old boy is outraged after Chicago police handcuffed and detained him because he was mistaken for a person of interest. The officers involved in the incident are now under investigation, WMAQ-TV reported Wednesday.

Police said they received a call about a young Black male carrying a gun in the area and that the fourth grader, Michael Thomas Jr., fit the description but ran when they approached him.

A cellphone video that went viral Wednesday shows the boy being detained and pushed onto the hood of a police car as he’s questioned about possessing a firearm.

“They’re telling them that someone called them saying that there is a 12-year-old black kid on a bike with all blue on had a gun,” Thomas Jr.’s uncle, Victor, is heard saying in the video. “There was about five little black boys with all blue on.”

One officer can be heard saying, “We get out the car, he starts running. That’s why he’s in handcuffs.”

The boy’s grandmother is also heard speaking to police in the clip.

“You can see that he doesn’t have any weapons on him,” she says. “I raised up my grandbaby’s shirt. He don’t have anything on him. Take those handcuffs off of him.”

Witnesses said Thomas Jr. was detained for 15 minutes before police removed the handcuffs. In the video, he’s seen crying as police let him go. His mother, Starr Ramsey, told WMAQ-TV she “wants answers.”

“You can look at him and tell he no teenager,” Ramsey said. “Ten-years-old you get handcuffed? You scarred him for life.”