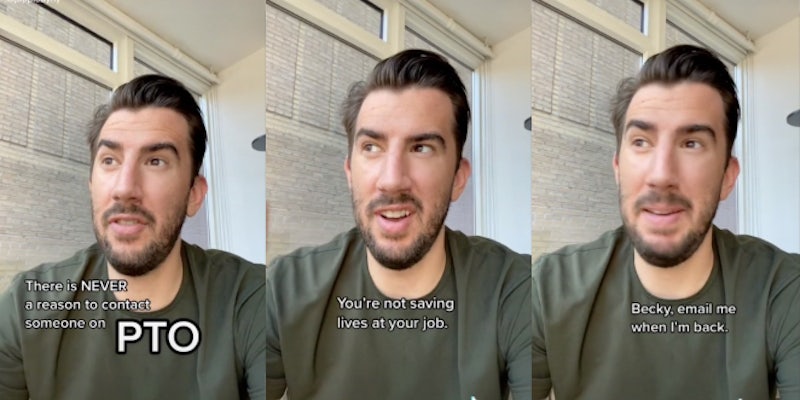 ‘I just had to quit my job over this!!!’: Business creator says there is never a reason to contact someone on PTO, sparking debate

'Their lack of boundaries doesn't mean you have to break yours.'

When is it appropriate to call someone while they’re taking their paid time off? According to TikTok user and business creator Jack (@japplebyny), the answer is “never.”

In a video with over 367,000 views, Jack simply states the following, “There is never a reason to contact someone on PTO. You’re not saving lives at your job.”

He added in the caption, “If there’s a fire at work call the fire department.”

According to a 2021 study, 82% of Americans claim to have worked while on vacation. This can include full workdays or situations like Jack is proposing, in which one is required or heavily pressured to answer work questions while they are technically supposed to be off the clock.

In some countries, contact like this is becoming illegal. France and Portugal already have such laws, and states like New York are currently debating a similar regulation, per Forbes.

For the time being, however, many say that their bosses expect them to answer calls, and effectively “work,” while they are supposed to be enjoying some time away from the job.

“I just had to quit my job over this!!!” wrote one user in comments. “Couldn’t even enjoy my vacation & they had the audacity to act like I was over reacting!”

“Tell my boss this,” added another.

Most commenters advised simply not answering if a boss or manager calls while one is taking PTO, noting that whatever the issue is, it can be worked out upon one’s return.

“Their lack of boundaries doesn’t mean you have to break yours,” shared a user.

“I put in my away message ‘I will NOT have access to cell service or wifi,’” a second stated.

“New teachers take note: when you’re out BE OUT. You’ll hear from sub, your students, coworkers tomorrow,” a third explained.

Other users who claimed to work on the managerial side also hopped into the comments, with many backing up Jack’s video.

“Amen! As a supervisor-I do not expect any of my employees to work or be available during PTO,” a user detailed. “It can always wait! We all need the downtime.”

“The only time I reach out to a direct report on PTO is if there is a job opening for an area they wanted to promote to. That’s it!!” a further user contributed.

The Daily Dot reached out to Jack via Instagram DM.