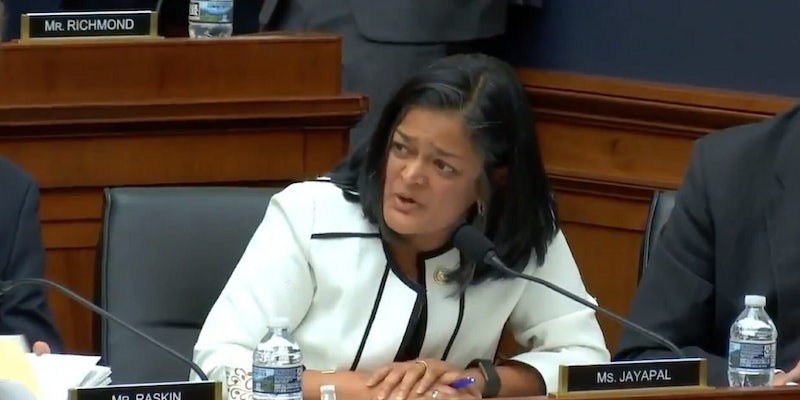 Rep. Darrell Issa (R-Cali.) attacked Rep. Pramila Jayapal (D-Wash.) on the House floor on Wednesday, using condescending and sexist language to point out she was a newbie in Congress. So Jayapal fired back—first on the floor, and then on Twitter.

While discussing an amendment to the Agricultural Guestworker Act of 2017 during a House Judiciary Committee hearing, Issa called Jayapal “the young lady from Washington” over her support for amending the act. Jayapal, of course, is 52, and Issa is 63, so the Republican congressman’s comments are particularly condescending given their narrow age gap and the fact that she has been a grown adult for over 30 years.

“Amendments have consequences, and what I find a little bit frightening about this amendment is the naïveté of the young lady from Washington,” Issa said. “And I know she’s a new member, but if I understand correctly, as we normalize at least 2 million guest workers that are already here, she proposes that we rachet that down to 450,000 total in a short period of time.”

“What we are doing with this bill is destroying the American workforce and ensuring that we have a permanent second-class of citizens across the country,” Jayapal said. “If that is naïve, as my distinguished colleague from California suggests, then perhaps we should all go back to being naïve and actually fight for our constituents and fight for the rights that make this country great.”

But Jayapal’s criticism didn’t end in the House. She then posted footage from the hearing on Twitter, saying Issa and other men in Congress repeatedly “mansplain” to female senators and representatives.

“Thank goodness we have so many men in Congress to mansplain our naiveté,” Jayapal wrote. “Here’s to you, @DarrellIssa.”

Thank goodness we have so many men in Congress to mansplain our naiveté. Here’s to you, @DarrellIssa. pic.twitter.com/sr7N3sWcsy

Nothing naive about it. I am fighting for the rights of American workers, for immigrants, and for dignity and respect for all.

Online, women praised Jayapal, pointing out that she’s standing up for women across the nation by speaking out against men like Issa.

Thank you, Representative Jayapal! I love you strong women in the legislator fighting for us all!

Thanks @RepJayapal! And as for Mr. Issa, well, your patronizing disrespectful behavior is not a good look. Time for a makeover, CA voters!

He called her "the young lady from Wash" (she was born in 1965) while she called him "distinguished gentleman from CA." She was extremely articulate, made a cogent argument, & used WAY bigger words. My Assessment: a #WhiteMalePrivilege attempt to dismiss a smart WOC.

Others point out that “mansplaining” isn’t strong enough to describe Issa’s condescension. He clearly shows disdain for the congresswoman, which many feel is rooted in misogyny.

Great answer! What a condescending comment from that boy!

This goes beyond "mansplain." This is "manscorn." I am so sick of watching these jerks belittle brilliant, strong women legislators!

This isn’t the first time a congressman has been accused of misogyny on the House floor. Jayapal was previously attacked by Rep. Don Young (R-Alaska) in September, calling her a “young lady” and saying she “doesn’t know a damn thing.” And of course, male Republican lawmakers have been repeatedly criticized for speaking over women on abortion and reproductive rights. Jayapal seems to be pointing toward a larger trend targeting women in Congress, one that probably won’t go away anytime soon.