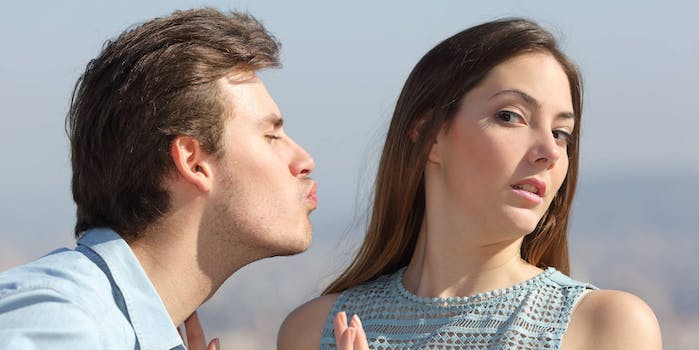 Two publications tell dudes not to take ‘no’ for an answer

The first was an article from Men’s Fitness, titled, horribly, “How to Turn a ‘No’ Into a ‘Yes.’” In case you need it spelled out for you, having someone say “no” to a sexual interaction and you ignoring it is the basis for rape.

After a lot of online backlash, Men’s Fitness removed the article.

The piece was written by Nick Savoy, a “PUA guru” and the creator of Love Systems (though he is apparently no longer affiliated with it), which he describes as “the largest and most successful company to offer training in the art of seduction or ‘game.’” In the article, he outlines how to ignore a woman’s boundaries, which is basically summarized by his first tip: Plow ahead anyway.

hey @MensFitness I fixed it for you, it seems you don't understand what "no" means! pic.twitter.com/VeT1aG1nDY

The Daily Dot has reached out to Men’s Fitness for comment about the article that has disappeared from their site, but has not heard back of this posting.

However, in more rape culture news, Complex published a guide on how to escape the “friend zone,” which is still alive and well.

..is the answer "stop thinking women owe you sex for being nice to them?"

The “friend zone” may sound like a fun place where all your pals get together and play laser tag, but, according to Complex, it’s the worst zone in the world. Worse than the danger zone. Worse than a war zone. Worse even than a hurricane evacuation zone. A friend zone is supposedly created when one person (typically a man) wants to become romantic or sexual with a woman, but she’d prefer to stay friends, or just not have any relationship—aka a fate worse than death.

In its piece, Complex takes on an article in Psychology Today, which doesn’t argue that you can just “escape the friend zone” so much as it says that being honest about your feelings is good. A study followed groups of friends in which one friend wanted to become romantic with another, and tracked whether the participant was flirting with their friends or not.

The study proved that making a move on your friend can indeed get you out of the “friend zone”…sometimes. “The participants’ romantic behaviors toward their friends made it more likely that the friends became more attracted to them over time,” writes Psychology Today. “But there was an important caveat to these findings—this only happened if the friend perceived the participant as a good catch. If the friend generally thought the participant was undesirable, no amount of romancing could change that.” So basically, if someone wants to be romantic with you, they’ll respond to flirtation, and if they don’t, they won’t.

Obviously, there have been plenty of times where a friendship has blossomed into a romance, but the concept of the “friend zone” positions friendship—especially heterosexual friendship—as a consolation prize to romance, or a staging site for a “real” relationship.

Rejection is hard for everyone, and it’s sad when you have feelings for someone and they aren’t reciprocated in the same way. But that doesn’t mean friendship is a way to sneak into a relationship. Also, the “friend zone” cuts both ways.

And just in case you didn’t know, there’s something you can do if a woman doesn’t want a relationship with you: Stop bothering her and talk to someone else!