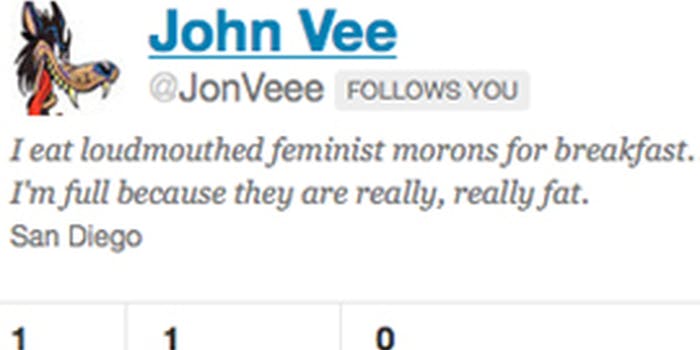 The Internet provided a united front against a noted troll targeting female comic bloggers with threats of rape.

The Internet fought back this week against a troll who used multiple Twitter, forum, and blog accounts to threaten female comic bloggers with rape and other forms of harassment.

“My troll powers are as unparalleled as the idiocy and irrelevancy of female comic bloggers,” he stated after derailing one thread on Comics Beat to berate female comics bloggers in comments.

But despite being banned and shunned by most of the women he harassed, he kept at it.

Then, on Aug. 31, he drew the attention of male comic Ron Marz, who entertained him briefly, then had enough and called his Twitter followers to action. Marz also identified the troll by a second Twitter handle, @JohnVeee, and BleedingCool identified numerous incidences of harassment under both sockpuppet accounts.

On the Bleeding Cool forums, members spoke of instances in the past where the troll had dumped hatred and sexism on their websites. Robot 6 reported that as the furor grew, Twitter followers began reporting the troll for abuse, and ultimately had both accounts suspended. Then Mark Millar, the creator of Kick-Ass, stepped in to alert his followers and involve the police.

It’s no secret that it’s been a rough year for women in the comics and gaming industries. It’s not really surprising that in the current climate for debate and discussion about the issues, there was backlash against the idea that the troll should be banned from Twitter.

In response to these kinds of responses, Sue from DCWKA posted about her history with the troll. Calling the troll “one of the biggest assholes of all time,” she explained how he stalked her for over 20 months, across multiple accounts and even multiple platforms:

Writing about the incident, Comicbookgrrl pointed out that the troll targeted women for nearly two years without any serious repercussions:

“This shows yet again that when it’s men that step forward and complain, people listen, while when women complain they’re told to just ignore it and it will go away or that it’s not that serious.”

Meanwhile, ComicVine connected the incident back to the earlier harassment this summer of geek feminist blogger Anita Sarkeesian. “Why should this behavior be tolerated? And why does it feel like it’s so heavily embedded in ‘geek culture’?”

Regardless of the root causes for this particular level of intensity regarding attacks on women in geek culture, the fact that this time the troll was threatened with real-life consequences for his actions represents a first for geek cultural Internet spheres. This week’s largely united response from women and men may deter other potential Internet bullies from beginning similar courses of harassment.

Most importantly, the geeks of the Internet now have a somewhat coordinated response in case more trolls like this one come along.