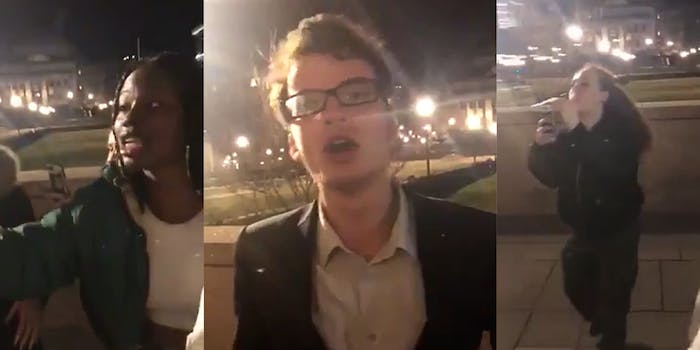 'White people are the best thing that happened to the world.'

In the video, the man, identified by the Columbia Spectator as 21-year-old sophomore Julian von Abele, can be seen screaming at the group of students on campus, “White people are the best thing that happened to the world” and “We built modern civilization.” Von Abele works himself into a fit, yelling for a good while about how white people are the best and saved everyone.

He gets angrier and wilder, hoarsely screaming and waving his arms as he runs around the group of students, yelling, “Fuck yeah white people. Fuck yeah white men. We’re white men, we did everything. I don’t hate other people, I just love white men.”

According to witness Kwolanne Felix, who was a part of the group, her group of friends had been walking to the dining hall when von Abele joined them and acted normally at first. Felix said he suddenly grabbed a woman in the group, and when she pulled away, he got angry. Felix said von Abele cursed at the woman and started praising Trump and yelling about white people.

Felix and her friends went into the dining hall, and a short time later, von Abele followed them in. There she said he stood in the middle of the dining hall and continued ranting at them. “Everyone was uncomfortable,” she said to BuzzFeed News. “The staff is definitely mostly people of color.”

In a statement, Columbia University denounced the “racially charged incident,” saying, “we stand firmly against white supremacist language and violence.” However, there has been no word from university officials on if von Abele will see any consequences for harassing his fellow students. The person who posted the video said in a follow-up tweet that this reflects “the exact mentality that the @columbia core perpetuates,” referencing a curriculum that does not adequately reflect the important work of women and people of color, perpetuating the idea that the contributions of white men are the most important.