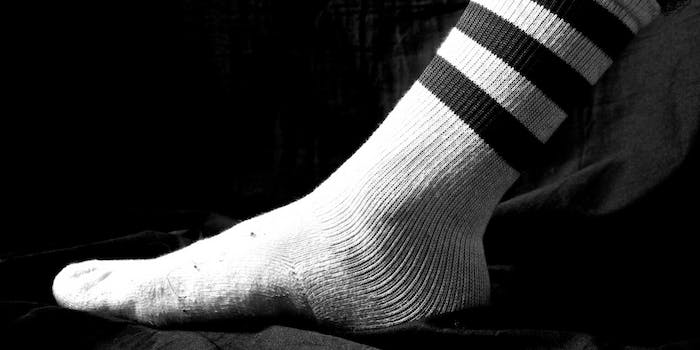 These guys are wearing nothing but socks to fight cancer

This is definitely raising some awareness.

Taking selfies for a good cause—it’s ego-boosting charity work that’s as old as the humblebrag. Why no, this photo of my immaculately clean, makeup-free face has not been posted to highlight my luminous skin and thick eyelashes! It’s to raise money for cancer research!

And now we’ve got a new feel-good Instagram trend every guy can get into: sticking your dick in a sock to raise awareness for testicular cancer. Allow me to introduce the #CockInASock selfie.

As noted by the Gaily Grind, the NSFW campaign is an effort of Cancer Research U.K., but there’s nothing on its site suggesting as much.

Cancer Research U.K. was recently tied to the aforementioned #NoMakeupSelfie fundraising, though it didn’t start the whole thing; it simply supported the charitable photos and suggested that people donate by texting “BEAT” to 70099. It’s been working, and contributions have been pouring in.

The most official site tied to this new hashtag campaign is Getyoursockout.co.uk, which has a PayPal account up to recieve donations. Its Facebook page also explains that “it’s our turn now, lads,” in reference to the makeup-free selfies which have been sweeping the Internet this past week.

And yes, plenty of the photos feature very fit men in very good shape who most certainly have washboard abs. Like I said, bragging. But hey, it’s for a good cause.

Whatever or whoever started the #CockInASock campaign, submissions are going up rapid fire, and hopefully the donations are as well. Some of the photos and captions include prompts to text “BEAT” to 70007 in support of prostate and testicular cancer research.