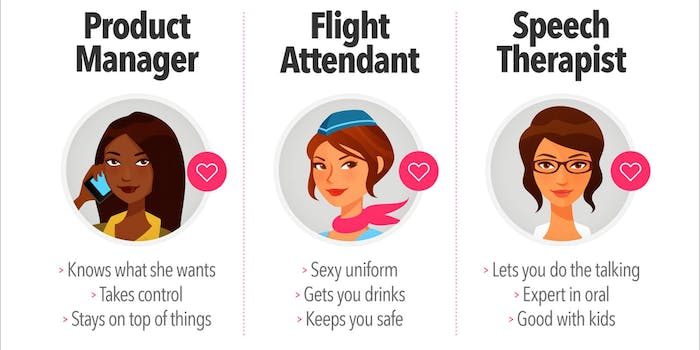 Is your job sexy enough for your dating profile?

According to this survey, male bakers are not sexy. We demand a recount.

When signing up for any dating app, the question on any user’s mind is obviously “Is my job sexy enough?” In that moment, paralyzed at what to reveal about our professions, we curse our high school guidance counselors for not giving us a full rundown of the sexiest professions before we were sent into the world.

However, Clover dating app now has a list of the sexiest and least-sexy jobs for men and women, so you can lie on your profile? That’s what they suggest in a press email with the subject ”Don’t List These Jobs in Your Dating Bio.” We’re not quite sure how this is supposed to work, but according to their hetero-assuming data analyzing 1.5 million U.S. dating profiles, people with certain jobs seem more popular.

In women, men seem to like project managers, waitresses, and… interns. According to an infographic that accompanied Clover’s press release, female speech therapists are sexy because they “let you do the talking.” So men like women who shut up, but don’t like when women are bus drivers because they’re “grumpy,” or chemists because then a woman is “smarter than you.” Super.

For men, it’s not much better. Doctors and lawyers are sexy, and male lawyers are 55 percent “sexier” than female lawyers. And you’re more likely to pick up women if you’re a barista than a cashier. The least sexy thing a man can be is a baker, which makes literally no sense.

We can’t tell if we’re angrier at Clover for presenting paid professions as a matter of sexiness or at everyone using the app for being so judgmental, classist, and stereotypical about someone else’s professional circumstances. Because all of these fall along the cultural lines that men should have high-paying jobs, and a woman’s job is only good if it’s not better than a man’s or if her uniform is hot. Aside from that depressing news, where does this leave the women bus drivers and male bakers of the world? Doomed to never date? Forced to change careers? Made to hide their profession from their partners for the rest of their lives lest they be thought of as unsexy?

Yes, it’s fun to play with numbers and track trends, but as a matter of practicality, nobody can do anything with this data. Except maybe enroll in medical school, which seems drastic. The only thing the data possibly show is that the heterosexual dating world is still full of sexist assumptions about gender roles—and so are dating apps. Happy hunting!