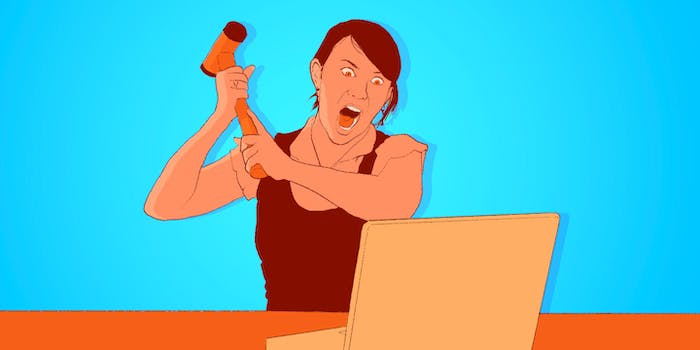 New Gmail app blocks women from writing ‘sorry’ too much

But do we really need a Chrome extension to do this?

Women tend to say “sorry” more than other people. We tend to apologize and minimize our own statements, writing in work emails that we “just” want to raise an issue, and that we “actually” feel like something “might” be a good idea—sorry!

Now Cyrus Innovation, a feminist software development firm, has created a Gmail plugin to help track and highlight the amount of “sorrys” and related terms that pepper emails. CEO Tami Reiss recently wrote an introductory explainer about the extension for Medium: “Qualifiers hint to the reader that you don’t have faith in what you’re saying. The last thing you need is to seem unsure of yourself. We want to make it easy to kick the habit by making it obvious when these qualifiers are holding us back.”

Reiss’s Just Not Sorry extension for Chrome and Gmail automatically highlights a number of qualifiers, with pop-ups explaining why each term has a negative impact. Say you’re jotting off a quick email to your boss with an idea for an innovation. Starting off a sentence with “I’m no expert, but…” causes an immediate flag, and a pop-up window relays a quote from Fast Company writer Lydia Dishman: “‘I’m no expert’ undermines your idea and displays and overall lack of self-confidence.”

It’s certainly an idea whose time has come: Writers have been attacking women’s overuse of the word “sorry” for years. Most of these critics are feminist women with only the best intentions. They want to see women being taken more seriously in the office and beyond. But what seems like a move toward emboldening women can easily slip into chastising. In a June New York Times editorial titled “Why women apologize and should stop,” it’s hard to even get past the finger-wagging headline. But the article quotes a 2010 study in the journal Psychological Science that points out how “women have a lower threshold for what constitutes offensive behavior,” hence the apologies and niceties. Is it so wrong to be allegedly more sensitive to potentially offending people? That seems like a trait everyone might aspire to. Apparently not: 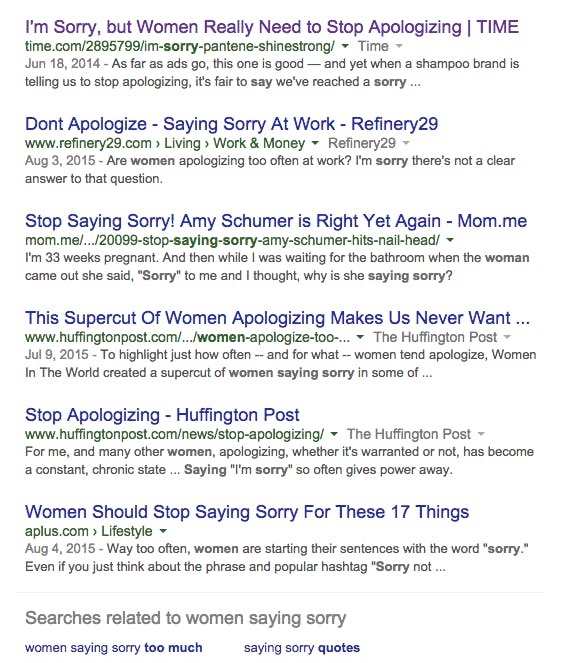 I tried using the Chrome extension and it actually just resulted in wanting throw my laptop at the wall, yelling “don’t tell me what to do!” I didn’t like the fact that it highlights certain terms—you’re being chastised for the way you naturally talk. Even typing “sorry, but” renders a feminist quote from the extension—you’re beaten over the head with something you already know.

So what if “like” and “just” pepper into my speech? If people don’t take me seriously because of a few extra words, that’s their fault—I’ll be the first to point that out to them. (Albeit, you know, in a nice way.)

The constant criticizing of women’s speech doesn’t stop at our choice of words, either. In July NPR ran a segment on “vocal fry” and “upspeak” that sent the feminist Internet into battle over women’s voices. It was kind of, like, exhausting—and worse, it introduced the public to “vocal fry,” yet another term for attacking women’s voices.

Tami Reiss told Slate that her company’s Chrome extension is designed to help “change the environment” in which women’s language is devalued.

“Sometimes the environment needs to change in order to enable better behavior,” Reiss said. “We thought: What if we changed the environment? What if we pinged someone to say, ‘Hey, you’re doing this thing that you probably don’t want to do. The response is going to be unconscious to someone else, but its going to have a really big impact.’”

Reiss isn’t setting out to shame women and girls for speaking the way they were raised to, and it’s true that many of us could benefit from more firm confidence at work and school. But I’d rather see an extension that blocks sexist language, or a cultural moment that analyzes the way people listen to women, rather than yet another list of things we are supposed to change about ourselves in the endless and impossible effort to become perfect.