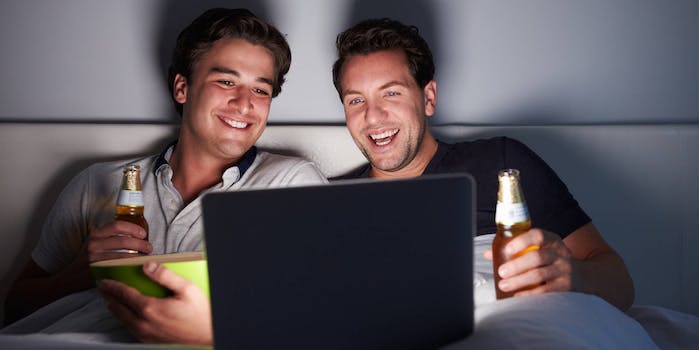 ChristianMingle.com will enable LGBT matches on its site after years of legal wrangling.

A prominent Christian dating website has been forced to acknowledge that there are gay Christians out there and that they too might like to find a partner as much as any straight Christian would.

As Sunnivie Brydum detailed for the Advocate on Sunday, ChristianMingle.com is now opening up its dating service to accommodate same-sex couples too.

In fact, it’s not just for ChristianMingle.com. The site’s parent company, Spark Network, was ordered by a California judge to remove restrictions on all of their sites that forces users into heterosexual matches. This includes SilverSingles.com, BlackSingles.com, CatholicMingle.com, and LDSSingles.com. Yes, even all the gay Mormons out there will eventually be able to seek some same-sex companionship.

Judge Jane Johnson approved a settlement on Monday, stipulating that Spark Network’s tacit prohibition on same-sex dating had to end, thanks to California’s anti-discrimination laws. According to her order, the Spark Network sites are now on a two-year timeline to reform their presently restrictive settings.

“Spark will ensure that the ‘man seeking woman’ and ‘woman seeking man’ options on the gateway/home pages of the Mingle sites ask only whether the user is a ‘man’ or a ‘woman.’”

The upshot of all this? If you’re somebody who lives at any of the intersections these sites previously refused to cater to. Say, you’re a gay Christian, or a black lesbian, or a bisexual Jew; you’ll soon be able to use these sites to find matches.

As The Wall Street Journal noted on Thursday, that noticeable change has already taken place on ChristianMingle.com. When someone makes their first visit to the site’s homepage now, rather than being asked whether they’re a “man seeking woman” or a “woman seeking man,” they’re merely asked for their gender.

It may not be such an enormous deal if you’re not a person of faith, or somebody in the core demographics of any of the Spark sites, but rest assured, this is very great news for a lot of people. Religious LGBT singles who might otherwise feel uncomfortable or unsure of how to make new romantic connections now have a few more ways to do so.