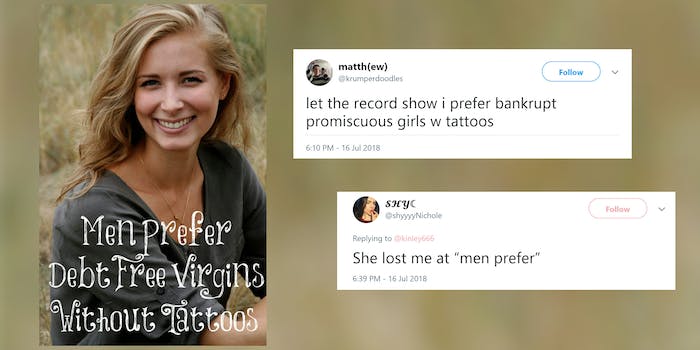 Your dad should also read you the Bible.

Christian blogger and author Lori Alexander has an important message for young women: Abstain from sex, debt, and tattoos if you want to nab a man.

Alexander shared her throwback, patriarchial views on her website, The Transformed Wife, in a post literally titled, “Men Prefer Debt-Free Virgins Without Tattoos.” Truth is stranger than fiction, and this is not a joke.

While sexual purity is an expected (though nonetheless pernicious) behavior requirement among many devout Christians, the other two parts of Alexander’s thesis have many people raising their eyebrows.

“[Jesus] calls debt a burden and urges us to live lives of sexual purity,” writes Alexander in the opening paragraph, which may lead a reader to believe this is a post about lavish credit card spending outside one’s means, which could be a reflection of greed, an actual sin. But no, it’s actually about why women shouldn’t go to college.

According to Alexander, “Secular universities teach against the God of the Bible and His ways. It’s far from what God calls women to be and do: it teaches them to be independent, loud, and immodest instead of having meek and quiet spirits.” Instead, Alexander says college years are an important time when women should be learning to cook large meals for their future husband and children.

How about the subtle anti-intellectual message ; “the high cost of college “. That’s the truly nefarious part.

I'm the Fairy Godmother and Cinderella are the people that think this is true. pic.twitter.com/kxA3gHMiPY

Alexander also quotes a “reader email” which says, “Most girls have not read the Bible with their father (Ephesians 6:4) or husband to explain it to them (1 Corinthians 14:35)” because apparently just sitting at home and reading the Bible alone isn’t godly enough, they actually need a man to read it to them.

Twitter users responding to the post have been combing through the Transformed Wife’s online presence, which is rife with claims against women’s independence, including the possibility that she may not even be running her own Facebook page.

Although the post opens and closes with statements about the evils of debt, sex, and tattoos, nowhere within the post does Alexander explain her stance on tattoos. Which, given the wild claims made on the Transformed Wife, isn’t really that surprising.