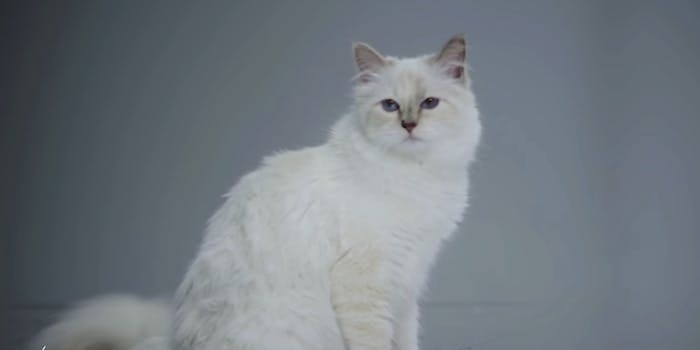 A cat is getting her own makeup line

But not just any cat: Choupette Lagerfeld, the sexiest and most glamorous feline on the Internet since Lil Bub.

Let’s get one thing straight: You will never be as fabulous as Choupette, the pet cat of designer Karl Lagerfeld. You’ll never be as beautiful as her. You’ll never be as smart as her (as evidenced by the fact that she has her own book deal and the facility with which she plays with her personal iPad). And you’ll never be as popular as her, unless you also have 40,000 and 21,000 followers on Twitter and Instagram, respectively.

But there’s one thing you can do to capture some of that elusive Choupette magic: Wear her makeup. The Japanese makeup brand Shu Uemura has just announced the release of Shupette, a collection of makeup and skin care products inspired by the fashion world’s most pampered pussy. To promote the line, they’re also launching an Instagram competition, where you can post selfies and cat photos for the chance to win a free makeup box.

Launching this October, Shupette—get it? It took me a little bit, to be perfectly honest—includes eyeshadow modeled after the cat’s signature blue eyes and false eyelashes decorated with pink feathers, silver highlights, and crystals. (Because cats have feathers? Idk.) All of the products are adorned with a Choupette “charm,” which features Daddy Karl’s sketches of the cat.

The collection also features a variety of eye, lip, and nail polish shades, as well as a “signature” Choupette eyelash curler, which seems like it would be difficult to operate without opposable thumbs, but if anyone can pull it off, Choupette Lagerfeld can.

A little background on Choupette (although frankly, you should already know damn well who she is): She was adopted by Lagerfeld back in 2011, after he procured her from Chanel model Baptiste Giabiconi. Since then, she’s appeared in a number of high-fashion photo spreads and inspired the parody Twitter account @ChoupettesDiary, which skewers her lavish lifestyle. (Fun fact: She also served as the inspiration for my final journalism school essay, which should speak volumes about both the value of my intellect/journalism school in general.) She also has two maids, two iPads, and has inspired her own Chanel handbag. Not a bad résumé for someone who micturates in a box.