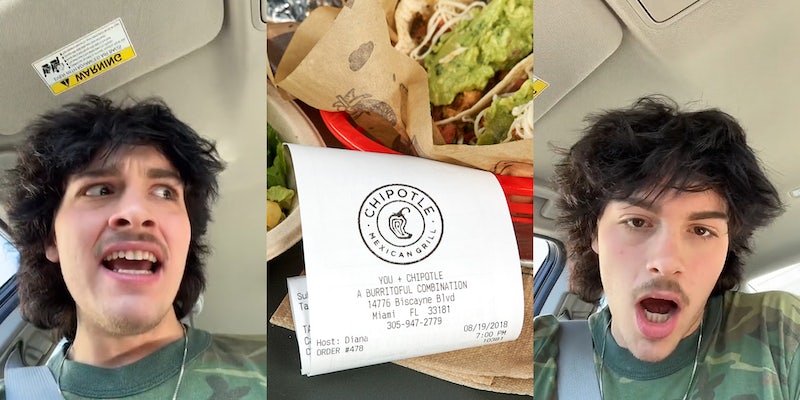 In a viral TikTok video, a Chipotle customer echoes the gripes of fellow customers regarding the fast-casual Mexican chain’s price increases that led each burrito bowl to cost nearly $20.

The cost of food at the popular fast-casual Mexican chain. According to SheFinds, the franchise implemented an 8.1% surge in pricing in 2021 and at the onset of 2022, another 10.5% was tacked on to cover the increasing cost of food and more competitive wages.

As a result, several folks have come up with “creative” ways to get more food for less (much to the ire of employees).

The brand’s Chief Executive Officer, Brian Niccol, expressed confidence in Chipotle’s ability to maintain a strong customer base in spite of swelling item costs. “I really believe the value proposition that we sell today is our strongest proposition. We looked really hard at this. When you look at a chicken burrito, steak burrito and you compare that to your alternatives, the value is there,” he told SheFinds.

Don’t count TikToker Tyler Funke (@fylertunke) as one of these patrons. Like a fellow user on the platform @robertbuckmon, Funke was gobsmacked by the cost of a Chipotle burrito bowl and couldn’t understand how two barbacoa burrito bowls and two medium drinks came out to $40, even though only one of the bowls had guacamole in them.

In the clip, Funke also implies that the chain’s prices are dishonest, stating that with toppings and add-ons, the cost of the items seemingly doubled when it finally came time to pay at the register. Fast Food Menu prices currently list the cost of a Chipotle barbacoa burrito bowl as $7.50.

“I’m sorry Chipotle but you gotta lower your fucking prices, dude,” Funke says. “I’m in there getting a bowl, and you read on the menu, it says meat things like chicken is $9.50 or barbacoa is $10. You think your bowl is just gonna be $10. And then you start putting toppings on it, and I’m getting a bowl for me and Jazz, and it’s rung up to $40. I got two medium drinks, 2 barbacoa bowls, and one of them had guacamole. And I know the guacamole is not ten fucking dollars.”

Viewers shared Funke’s frustration, stating that they too feel they’re paying way too much every time they visit the franchise. Others have stated that they’ve given up visiting the chain because they claim it’s becoming more and more expensive for the food that they’re getting.

“NO FR ITS SO EXPENSIVE FOR NO REASON!” another urged.

Some stated that the franchise’s affinity for miscellaneous fees is what ultimately results in higher item costs.

“No they charge $16 for an extra scoop of corn and it infuriates me,” one viewer complained.

“i went to a chipotle that was out of guac, lettuce, beans, cheese, and salsa….i just asked for queso on top and they said $3 A SCOOP …YALL HAD NOTHING,” a second shared.

“And let’s not talk about how they purposely skimp when u DoorDash it… extra chicken was 13 pieces. 13,” a third added.

A Yahoo Finance article shared some tips on how to maximize the amount of food you’re getting with your Chipotle order without getting charged more. The outlet claims asking for “half and half” of rice and beans usually results in more of the toppings without an extra charge. Chili-corn salsa and fajita veggies can also be added in at no additional charge, the article advises.

But even with these hacks, it seems like there are a lot of Chipotle customers who are not happy with the prices the chain’s been charging.

“I never get drinks at restaurants anymore lol they add up so much,” a further user wrote.

It doesn’t seem like customer anger towards these prices is affecting the chain’s bottom line, however, as Chipotle has reported significantly increased profitability in 2022.

The Daily Dot has reached out to Tyler via Instagram direct message and Chipotle via email for further comment.