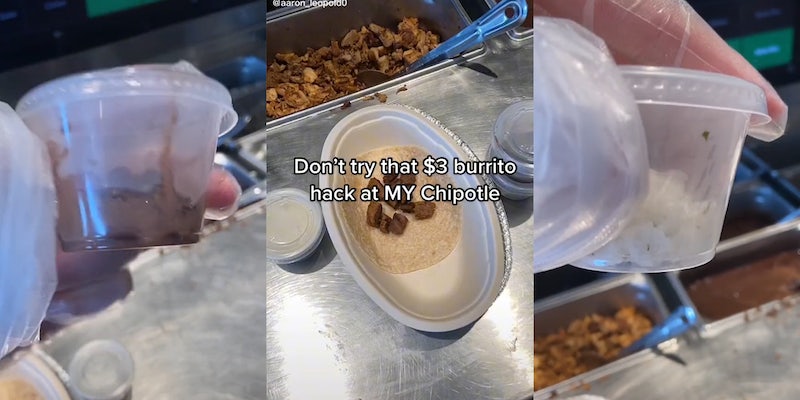 ‘Consider this my warning’: Chipotle worker shares PSA about the $3 burrito hack, sabotages customer’s order after they try it

'Don’t try that $3 burrito hack at MY Chipotle.'

Recently, a hack demonstrating how to get a burrito bowl from Chipotle for just over $3 went viral. Now, Chipotle workers have a message: Stop.

In a video with over 814,000 views, TikTok user and Chipotle employee Aaron (@aaron_leopold0) shows the amount of each ingredient he gives each of the “$3 burrito hack” orders. Spoiler alert: It’s not much.

“Don’t try that $3 burrito hack at MY Chipotle,” Aaron writes in the text overlaying the video. In the description, he adds, “Consider this my warning.”

At first, some criticized the move, saying that Aaron shouldn’t be worried about the bottom line of a major corporation.

“Why the employees pertend like they pay for the ingredients,” one user asked.

“Wait I didn’t know they take the supplies out of your paycheck,” a third echoed.

The “hack,” as shown in a viral video posted by TikTok creator Serena Gonzales, entails a customer placing an in-app or online order for one taco with their choice of meat and “extra” rice and beans. The customer then orders all the other toppings, like sour cream and salsa, on the “side.” The total should come out to $3.25.

It’s been dubbed the “$3 burrito hack,” and at least one other Chipotle worker has expressed they don’t like fulfilling such an order. Chipotle employee Christina (@christinamaeeeee) called out a customer to his face for attempting the hack. The customer maintained it was his first time trying the hack but told the worker that “if it’s a bunch of work for [the workers], then I don’t need to do it.”

However, others who watched Aaron’s video said they weren’t dissuaded from trying the hack.

“Lmfao if chipotle aint b*tching about it and hasnt it took it out of its menu on the app so imma still order it,” a commenter shared.

Further users and alleged Chipotle employees claim to have done the same thing Aaron did in his video in response to the hack.

“I did the same and these girls came up to me and tried to complain about not filling them up,” alleged a TIkToker.

“I did the same thing when this trend came out gave them almost nothing in the taco and then half portions of sides,” offered another.

That said, additional users stated their view that, if they received such portions, they would simply not pay the bill.

“You better get that money from me first thing then because otherwise you’ll be putting all those back when I walk out the door and don’t buy it,” wrote a user.

“Nah cause if my chipotle do this I’m not paying, I’m leaving,” a TikToker concluded.

We’ve reached out to Aaron via Instagram direct message.