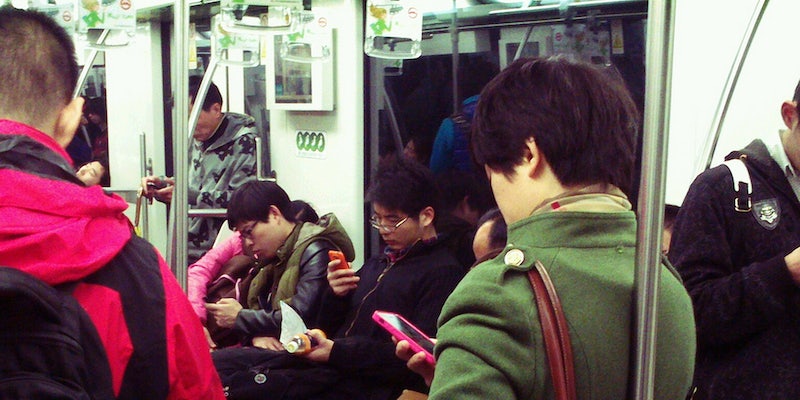 Many women prefer cellphones to sex, especially in China

Maybe they’re getting better service in that department?

A large percentage of women would rather surrender sex than part with their cellphones.

Maybe they’re getting better service in that department?

MSL Group and Dot Complicated released details of the social study this fall. Among 900 Chinese women aged 18 to 64 who use the Internet for leisure or personal reasons at least two hours a week, 45 percent said they’d prefer to abstain from sex for a month rather than going without their cell phones for that long.

Also interviewed were 2,700 “wired women” in Brazil, the U.K., and the U.S.—countries where, respectively, 28, 38, and 39 percent of respondents would take the same celibacy deal. In all categories, Chinese women appeared the most tech-savvy and device-addicted: 91 percent owned smartphones, compared to 70 percent and below for the other nations.

Chinese women were also about twice as likely as average to connect with their bosses, seek romance, or keep up with current events on the Internet, and far more of them owned a laptop or tablet. More of them shopped online recently, and 42 percent said they monitored a child’s web behavior—though Brazil’s mothers were even more intrusive, with 44 percent keeping tabs.

Overall, it looked as if there’s simply less of a stigma about smartphone attachment and web reliance in China. While half the 3,600 women polled said technology has had a positive impact on their lives, there was wider approval in Brazil and China.  Just one in 10 Chinese women expressed frustration about the use of phones at the family dinner table.

The report also found a third of women worldwide concerned about the common and dangerous practice of texting while driving. Perhaps, since Randi Zuckerberg was one of the consultants on the project, she can let her brother know just how inadvisable the habit really is.