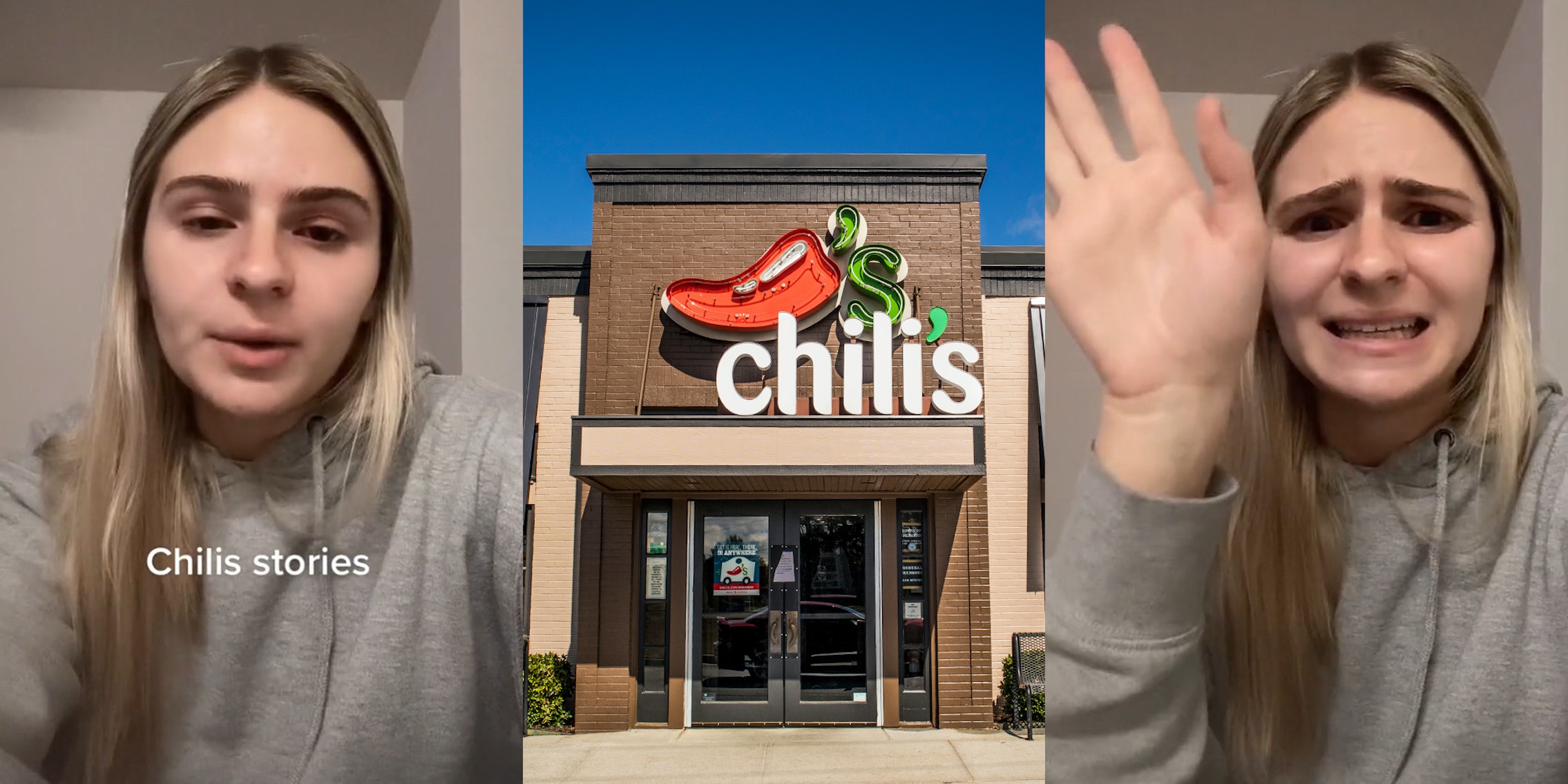 'Do not talk s**t about your customers. I learned that the hard way.'

A former Chili’s server went viral on TikTok after recounting a customer horror story in which she angered a table just 8 minutes before closing.

The TikToker, Nat (@mouseratnat), says the customers overheard her complaining about their constant request for strawberry lemonade refills. After they allegedly left a $2 tip on a $98 bill, the server says she threw a middle finger up in the air out of anger.

The customers saw this gesture through the windows of the restaurant since they hadn’t exited the parking lot yet, which left the TikToker and other Chili’s employees in a scary situation.

Nat explains that she worked at Chili’s for over 5 years as a server and bartender.

“I fucking love Chili’s. I stan that company,” she says in the clip. “I love their food, and I just have so many unhinged stories from working there that I feel like the world just needs to hear.”

Eight minutes before the restaurant closed on a Saturday night, Nat says her mid-manager sat a table of six in her section.

After the customers were seated, Nat let them know that they close in five minutes, so they need to order immediately.

She also claims the customers repeatedly ignored her, while others were on their phones or wearing AirPods. The Tiktoker adds that the lack of attention they paid her continued throughout the duration of her serving experience with them.

In the back of house, Nat says the cooks were upset with her because she put in so much food right before close. Then the customers ordered six cookie skillets.

“It is literally an hour past closing at this point,” the server explains, having handed the guests their bill. “They were taking their sweet ass time, and I think it was intentional.”

“After seeing that, after all that work… I turned around and threw up the middle finger because I was just made right? You just do that after that kind of shit happens.”

At this point, the TikToker didn’t realize that the group was still outside after their meal and could see her through the windows of the restaurant. She says the customers then called the store and threatened to fight Nat, before allegedly banging on the restaurant windows.

In a follow-up video, the TikToker continued her story. She says her manager questioned her after receiving the phone call.

The customers on the phone also allegedly told Nat’s manager that they could hear her complaints about how needy they were.

“This is just a warning to all servers out there: do not talk shit about your customers,” she concludes. “I learned that the hard way….especially in an empty restaurant with an open kitchen. So I learned my lesson, take full accountability I was talking shit.”

Nat adds that before the women drove away, another car entered the parking lot, and the pair of vehicles began circling the Chili’s. It’s at this time that her manager then asked someone to “get the police ready to be on the phone because we have two cars circling the restaurant.”

After the cars left, Nat’s co-workers walked her to her car, and she began to drive home. However, she says the customers had simply moved to the ShopRite parking lot across the street and were allegedly waiting for her to leave the restaurant. She claims the customers tailed her on the way home, so she didn’t immediately drive to her place.

She says the customers eventually made a different turn, so she was able to return home without being followed.

Some TikTokers who saw the video corroborated that they, too, have experience “unhinged” things while working at Chili’s.

“tbh chili’s has unhinged energy in general,” one user wrote.

“With all of these last minute walk in stories I see, why are the cooks always mad at the waitress? It’s not your fault the manager made you take them!” another suggested.

“You gotta learn to lie to ur tables, tell em ur out instead of giving urself extra work like that!!! they don’t deserve it,” a third added.

Others said that they’ve also had hard times dealing with customers who have a predilection for strawberry lemonade.

“As soon as someone gets a strawberry lemonade I just KNOW they’re going to be an issue,” one viewer joked.

The Daily Dot has reached out to @MouseRatNat via TikTok comment and Chili’s via email for further information.