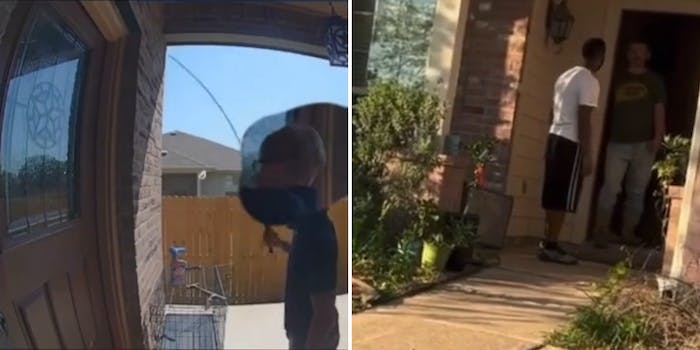 ‘You need to leave’: Child bangs on Black neighbor’s door with a whip in Ring video

'I will call the police.'

A viral TikTok video shows a white child banging on his Black neighbor’s door with a whip.

TikTok user @quazmo shared footage from a Ring security camera in the video. The incident happened May 12 in Kaufman County, according to CBS News. The TikTok clip has received 15.7 million views.

In it, the child is seen whipping the door before it swings open and a woman yells at him. CBS News identified the woman as Carissa Nash and said the family is “rattled” by the altercation. It led to gunfire.

“Little boy, you better get your ass up off my porch beating on my door like this,” Carissa tells the boy. “I will call the police. You need to leave. Don’t you ever beat on my goddamn door like that. Go!”

@quazmo Repost: Today was a crazy day! This kid comes to my door with a whip looking for my 9 year old daughter, then puts a big ass scratch on the Audi. The police came out and tells my wife, “it’ll work itself out since he moving soon” 🤦🏽‍♂️ So when I get home, the dad is outside, see’s me walking over to talk to him about the damages and goes in the house. The dad tells the son to say he’s not there. #rasist #tiktok #viral #explore ♬ original sound – Qua z mo

The boy appears to leave after the reprimanding. The Nash family told CBS News that the altercation began when their daughter and the boy were walking home from school May 12. A fight between several children resulted in the boy being pushed into a puddle of water. He thought it was the Nash daughter’s fault, so he came to their home with a whip, according to CBS News.

Another clip of footage shared in the TikTok video shows Carissa’s husband, who CBS News identified as Dezzera Nash, speaking to the white boy’s dad Bryan Brunson. The two are heard arguing about the Nash family’s car, which they say the boy scratched with his whip.

Dezerra told CBS News that it was a deep scratch that couldn’t be filled in or buffed away.

Brunson demands to see video evidence of the Nash family’s claims, and they tell him to come look at it on the Ring camera. Brunson appears to become angry and tells Dezerra to get off his property.

“You ain’t showing me the video of him scratching your car so get off my property,” Brunson yells in the video.

Dezerra begins to leave, but he and Brunson continue yelling at each other. Carissa tries to get the two to stop, saying, “Can you please stop, sir? All we want to do is just talk to you civil.”

In the video, Brunson accuses the Nash family of pretending to be “victims.”

As the argument got more heated, Brunson fired off a gunshot.

A Kaufman County constable confirmed to CBS News that Brunson had been arrested and charged with deadly conduct because of reckless discharge of a firearm, the news outlet reported. Brunson was released after posting an unspecified bond.

The Daily Dot reached out to user @quazmo via TikTok comment.