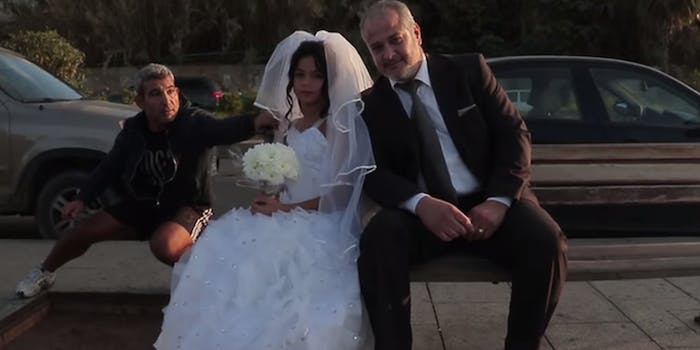 Child marriage is legal in Lebanon, and this video wants to stop it

An adult man and his child bride appear in provocative human rights video.

A staged Lebanese video showing a 12-year-old girl in a wedding dress “married” to a man old enough to be her grandfather has gotten two million views on YouTube as it publicizes the global problem of child brides.

The video shows the “couple”—both actors—being photographed at a waterfront in Beirut while passersby look on. Some adults are shocked and one questions the fake groom, who responds, “It’s none of your business. Her parents gave me permission.” More disturbingly, one man congratulates him on his child bride.

However, the public response is overwhelmingly one of disgust and disapproval, with an outraged woman saying, “I was jogging but my feet froze when I saw her.” A group of men gets antagonistic with the fake groom, threatening to throw him into the nearby sea.

Produced by KAFA (which means “enough” in Arabic), a Lebanese women’s rights organization, the video is intended to raise awareness of the fact that 15 million girls are married as children each year, some as young as 8 or 9. The United Nations Population Fund (UNFPA) reports that in Lebanon, where the age of consent is set by religious tribunals and varies from region to region, there are areas where girls as young as 9 can marry with parental consent. As explained on the Girls Not Brides website, this situation is often due to a cultural view of girls as a burden: “For many families, it is a perceived economic need—one less mouth to feed.”

In a press release about the video, KAFA’s communications coordinator Maya Ammar told the UNPFA:

“Some people do not know that the law in Lebanon allows child marriage, and others do not [care]. We chose to do the child marriage video to draw more attention to the issue, while at the same time engaging people in a real scene happening before their eyes.”

Girls married to adult men experience the trauma of being separated from their families, being pulled out of school and separated from their friends, and forced to participate in a sexual relationship with an adult potentially decades older than them. These children are also at extra risk of death from pregnancy-related complications (often due to their bodies being too young and small to handle to strain of pregnancy and childbirth). Suicide is a leading cause of death for child brides, and Girls Not Brides reports that they are also at greater risk of domestic violence and HIV infection.

Given the flurry of outraged shares that the video has gained on Facebook, YouTube and Twitter along with the hashtag #Idont, KAFA may have achieved their aim. They also intend on achieving legal change, though, and a proposal that any marriage involving a minor must be approved by a civil judge is currently stalled in the Lebanese parliament. KAFA hopes outrage from the video will spur the legislature on to consider the proposal.