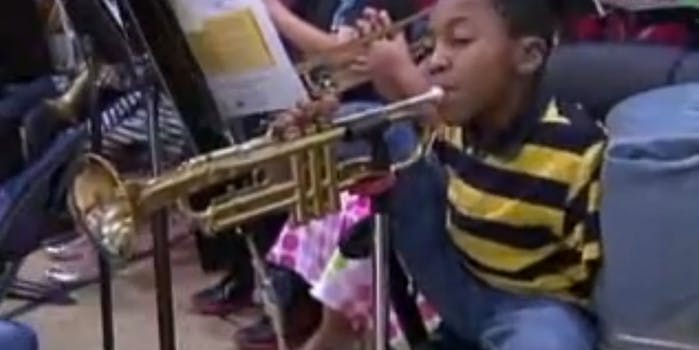 How a kid born without arms learned to play the trumpet

Four months ago, 10-year-old Jahmir Wallace decided it was time to learn how to play an instrument. His older sister played piano. He settled on the trumpet.

But what makes Jahmir different from other elementary school band students is that he was born without arms. He makes his way in the world through the dexterity of his toes and a spritely can-do attitude.

That’s why when Jahmir announced he wanted to play the trumpet, the teachers at his school in Phillipsburg, N.J., and a local music store instantly agreed to make his wish come true.

School administrators and employees at the local music store helped build a special stand to hold the instrument for Jahmir. He uses his toes to play.

All of his hard work culminated his elementary school’s fifth grade band concert just a few days ago. Jahmir said he doesn’t want to be treated any differently than the other 40 students who painstakingly learned the same notes, but he’s quick to acknowledge the people who made it possible for him to join the fun. That’s especially true when it comes to Kratzer.

“If it wasn’t for her, I would never know what the trumpet was,” he said.