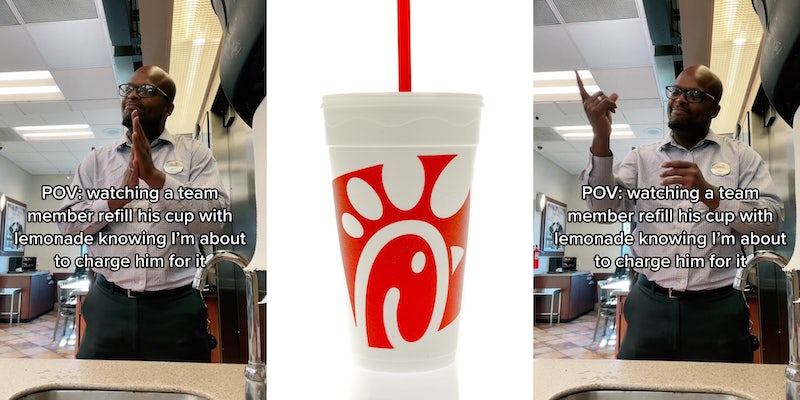 ‘No lemonade, milkshakes or treats’: Chick-fil-A manager says he charges employees for lemonade

'At my Chick-fil-A they try and charge us for WATER.'

A self-proclaimed “boss” at Chick-fil-A stirred up controversy on TikTok after saying he charges his employees for lemonade.

In a video with over 2.2 million views, user @Cool_Boss14 shows himself rubbing his hands together over the sound of a glass being refilled.

“POV: watching a team member refill his cup with lemonade knowing I’m about to charge him for it,” @Cool_Boss14 wrote in the text overlaying the video.

In comments, @Cool_Boss14 clarified the video is a joke. He said he thinks of his team members as family, and, in his words, “I do not charge my family.”

Still, it seems the point he made was an accurate one. Throughout the comments, alleged current and former Chick-fil-A workers told their stories of being charged for drinks while on the clock.

“Yes as a former cfa employee no lemonade, milkshakes or treats,” wrote one user.

“Bro @ my cfa they try and charge us for WATER,” added another.

“We only can get fountain drinks and sweet tea [for free],” a third stated. “never lemonade.”

There does not seem to be a consistent corporate policy when it comes to free food and drinks. Chick-fil-A’s website says that “many local franchise owners offer team members a free meal during their shift,” meaning there are some that do not. A Reddit thread on the topic shows inconsistent policies and enforcement of said policies from location to location.

Regardless of the rules, some alleged current and former employees said they simply took drinks as needed or desired.

“I don’t see manager stocking up cups and sauce so imma get that lemonade ERRTIME,” shared a commenter.

“Second ur back turned ima take my free lemonade,” agreed a second.

“If i work a 6 hour shift and want some lemonade imm get some,” explained a further TikToker.

The Daily Dot reached out to @Cool_Boss14 via TikTok comment and Chick-fil-A via media request form.